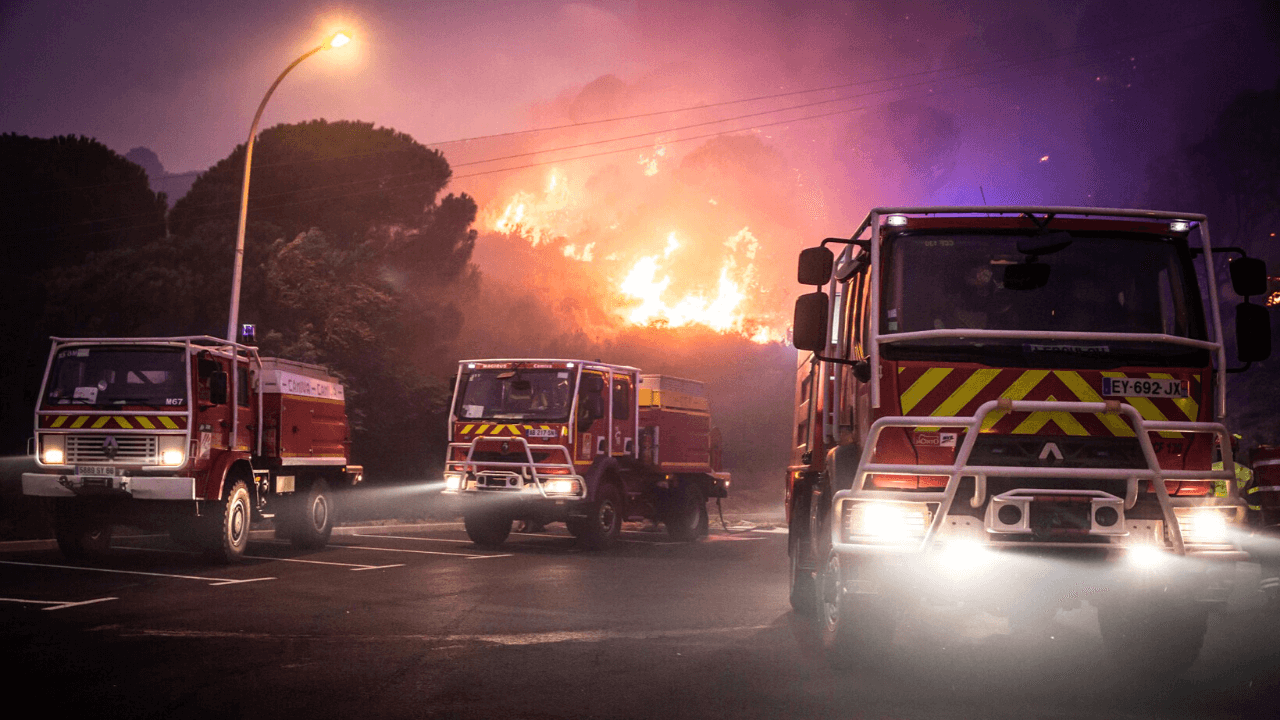 French firefighters, aka pompiers, are nationally recognized civil servants tasked with medical and firefighting operations in France. They need specialized vehicles which vary in function and size to achieve that mission. A while back I did an article on prehospital care and ambulances in France. Today, we’re going to take that a bit further and focus on a few of the most common French Firefighting vehicles. 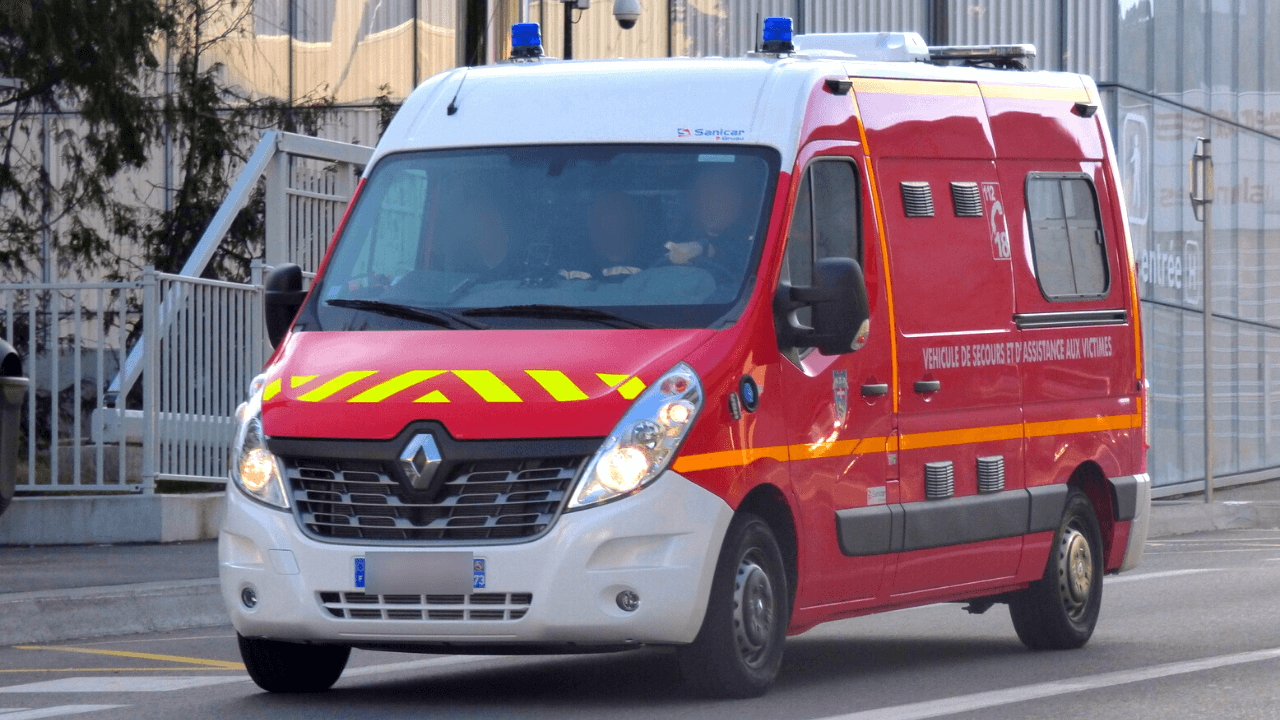 Le VSAV or Véhicule de Secours et d’Assistance aux Victimes (Victim rescue and assistance vehicle) is one of the common French firefighting vehicles you’ll see. This is because over 80% of a French firefighter’s duties involves responding to medical emergencies or car accidents.

There are two notable versions of the VSAV. The VSAV tôlé is the standard van-based ambulance. While the VSAV cube is a box ambulance similar to U.S. ambulances with additional cabin room.

All of the ambulances have at least one lateral door in addition to the large rear-exit doors.

There are three or four French firefighters assigned to every ambulance. The ambulances are capable of carrying up to six people: three in front, two in the rear and a patient on the stretcher. The high capacity means a SAMU / SMUR physician can be transported along with the patient if needed. 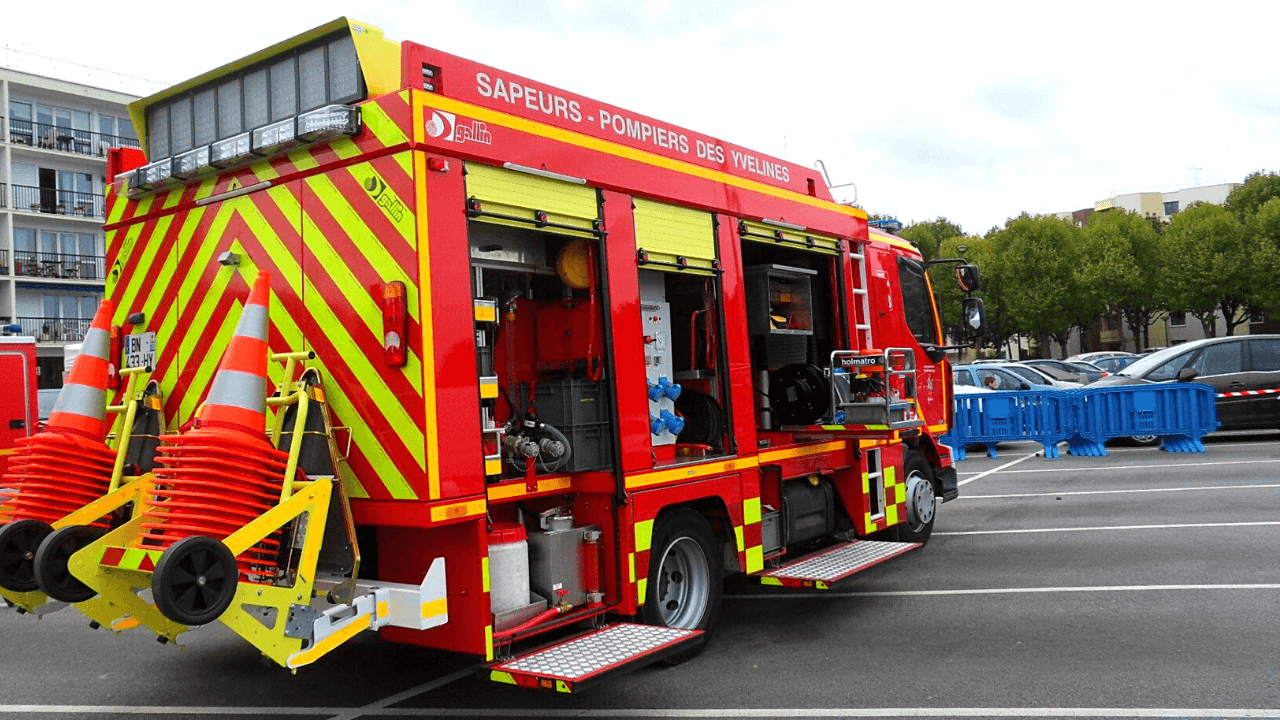 On every VSR you’ll find traffic cones, lighted signage or LED projectors, car jacks and wedges. Firefighters will also have access to equipment specifically designed to extricate victims from a dangerous scene.

The VSR comes with fire extinguishers to prevent an eventual fire. Some departments may specialize VSRs to handle incidents within tunnels or on railways. 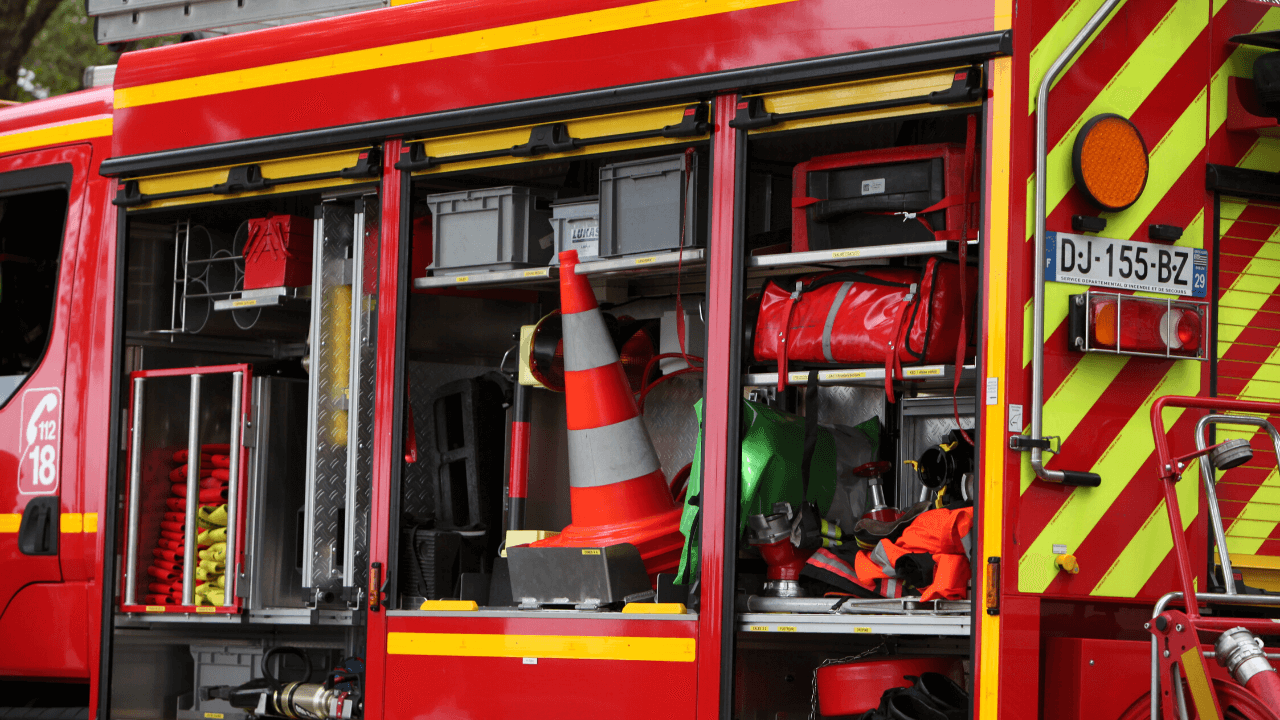 Caption (above): Equipment on a VSR (Source Wikimedia)

While the VSR can handle preventing a fire, certain fire trucks are equip to handle both large flames and vehicular rescue at the same time. These French firefighting vehicles are denoted as the fourgon pompe-tonne / secours routier (FPTSR), fourgon grand puissance secours routier (FGPSR), and fourgon de secours routier (FSR). We talk about the FPT in the next section.

The VSR is oftentimes staffed by three firefighters while the larger fire trucks (FSR / FPTSR) can accommodate up to six.

Le FPT or Fourgon Pompe-Tonne (Water tender) is a large fire truck capable of combatting urban or rural fires. They serve as the backbone of the firefighting effort.

The FPT comes armed with multiple hoses to propel high volumes of water towards the flame. Most sources state, at a minimum, this is 2,000 to 3,000 liters per minute all the way up to 6,000 L/min. The fire truck can pull water from sources over half a mile away.

An FPT may also dispense firefighting foam at up to 500 L/min.

An FPT crew consists of a total of six to eight firefighters. One of those being the sergeant, who is in command of the unit, and a driver.

There exists a more common variation known as the FPTL, Fourgon Pompe-Tonne Léger, or “light” version. This smaller tanker can have anywhere from four to six firefighters. 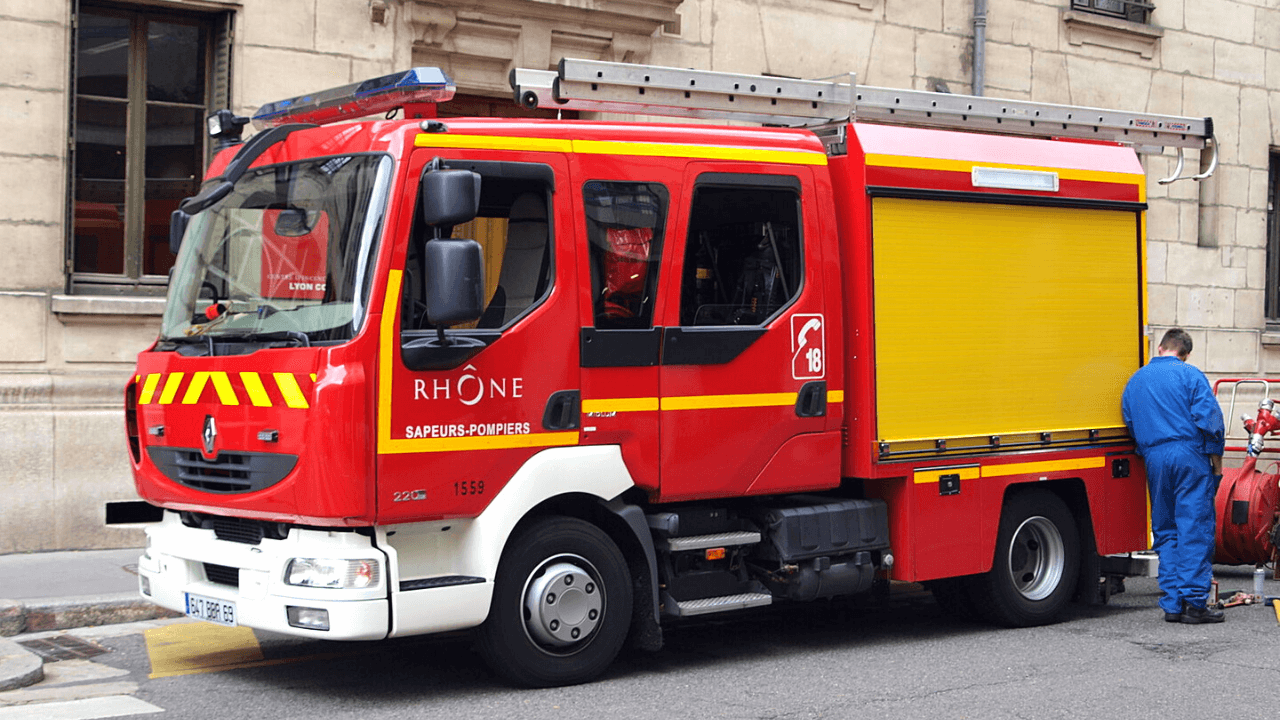 The EPA employs an enormous ladder measuring anywhere from 24 to 30 meters in length. While the BEA features a motorized folding ladder possible of reaching 32m. 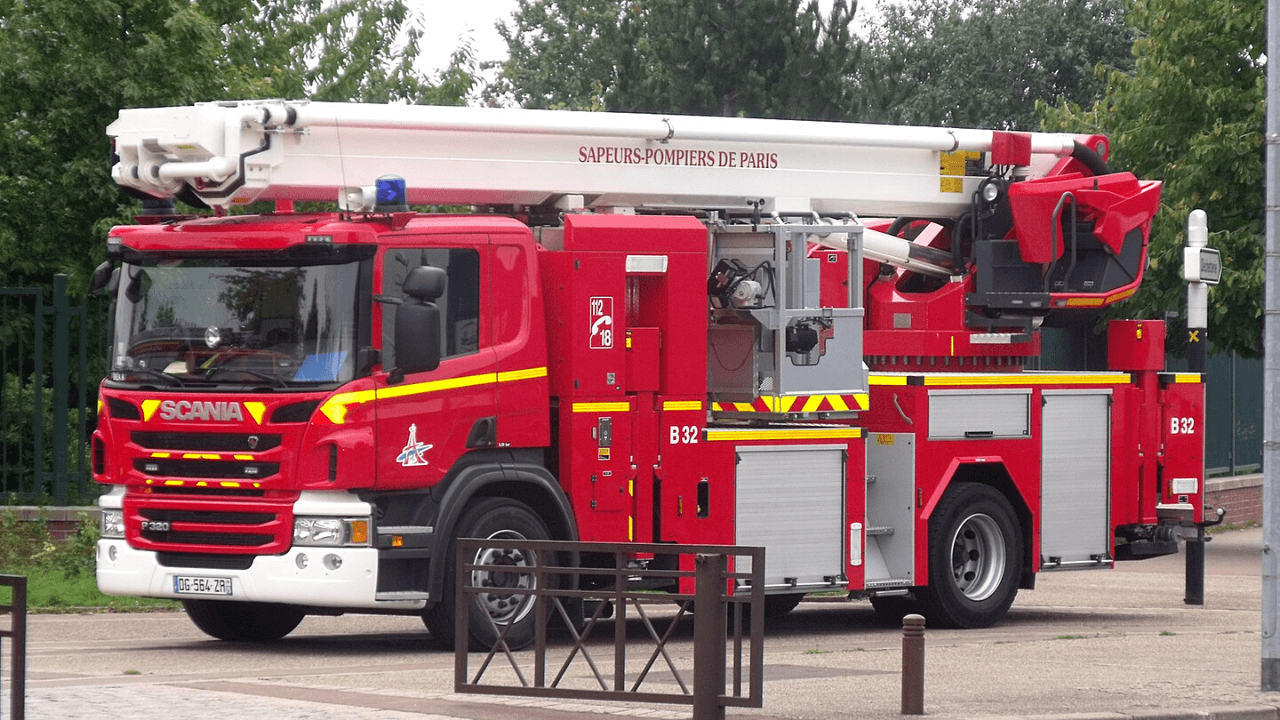 The purpose of the ladder engine is to help combat fires from a height. A BEA, for example, can douse flames with 3,000 liters per minute from its hose. The ladders assist with aerial reconnaissance in addition to rescuing people from trapped buildings. A special platform on a BEA can hold up to five people.

Two or three men are needed to staff the ladder truck: one sergeant, a driver, and a person capable of operating the large ladder. 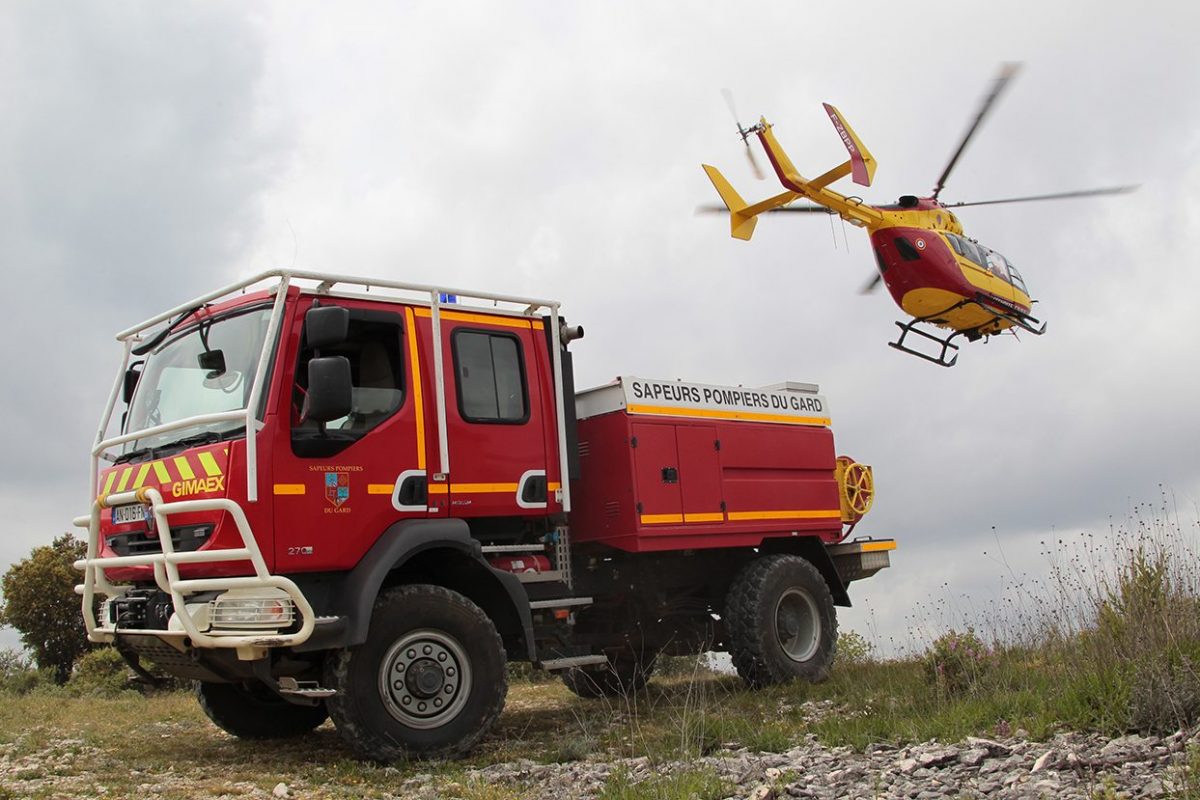 Le CCF or Camion-Citerne Feux de forêts allows French pompiers to combat forest fires on the ground. They work in conjunction with fire helicopters attacking the flames from above.

First off, the vehicle has improved ground clearance and enhanced 4×4 off-roading capabilities. A CCF can contain up to 13,000 liters of water and can pull water from distant sources (similar to the FPT). 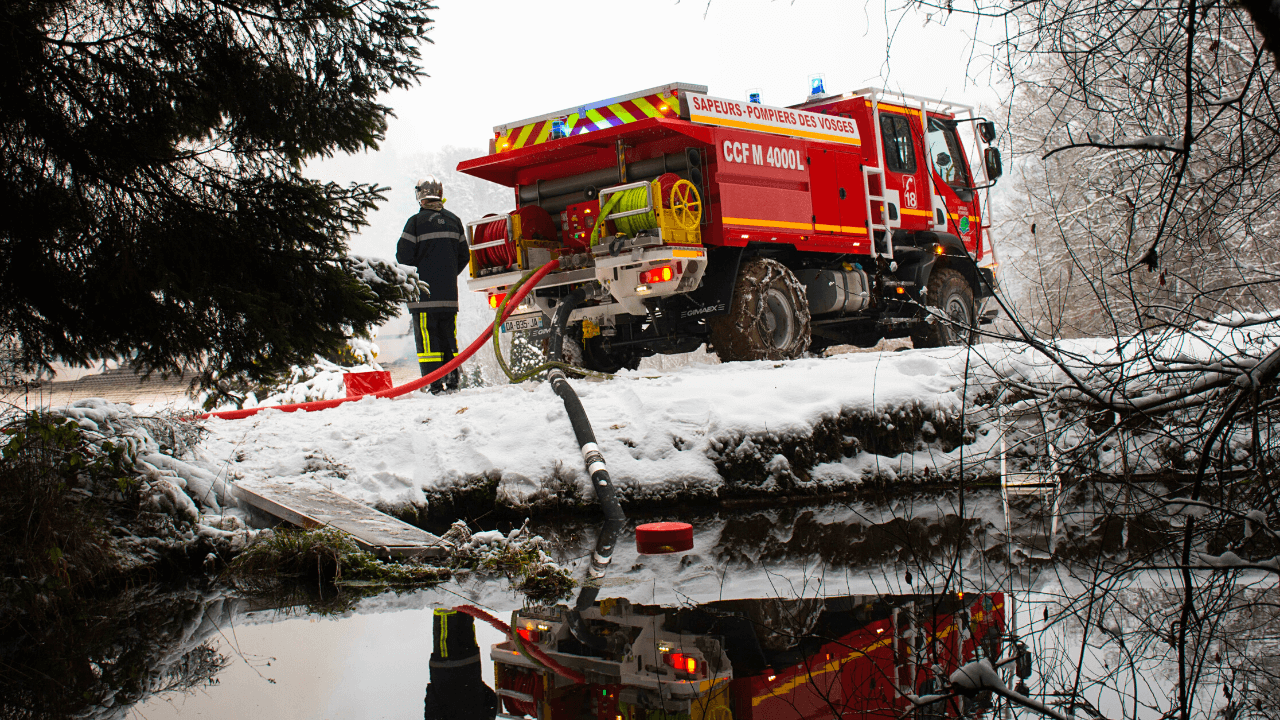 Caption (above): French CCF drawing water from nearby source (SDIS 88)

On board, you’ll find four firefighters: a sergeant, a driver, and two additional crew members. 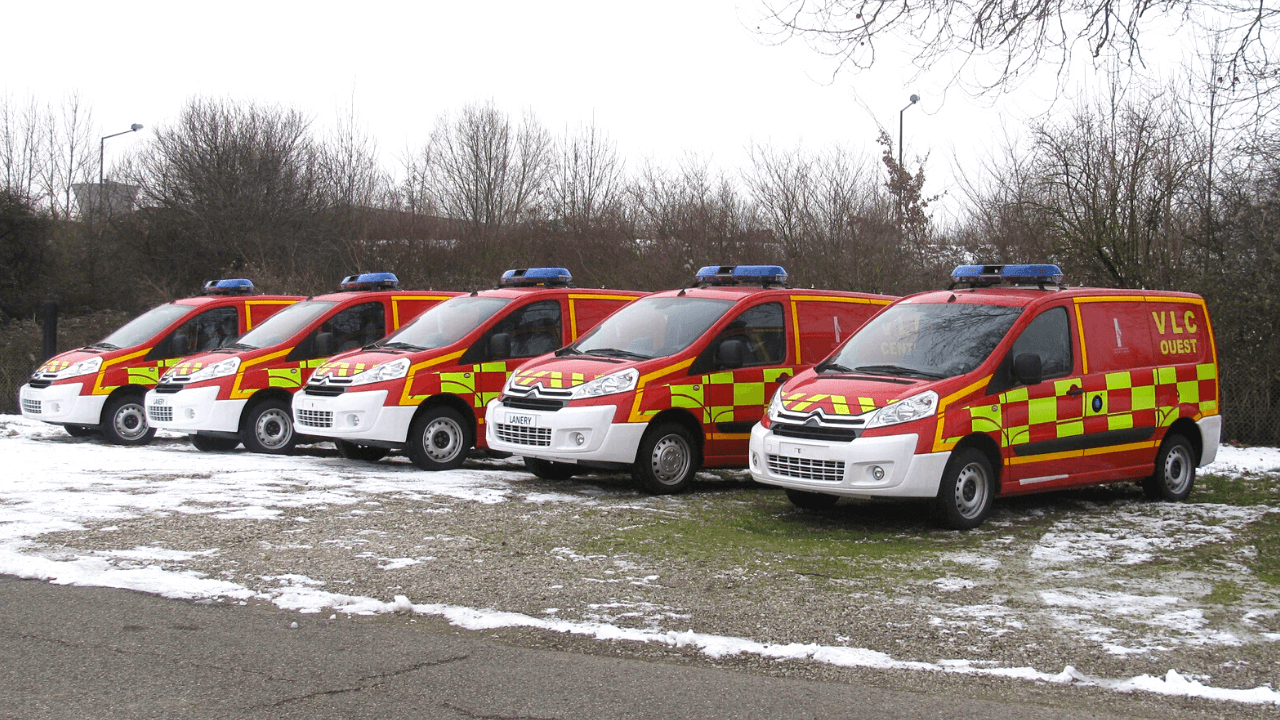 Le VLC or Véhicule Léger de Commandement (Light command vehicle) allows a fire fighting officer to get to the incident scene. It is also frequently used for operational, technical or administrative liaisons. While larger command vehicles exist, this one is for more typical operations.

On board you’ll have a tablet, maps, gas detection monitors, and a portable radio. 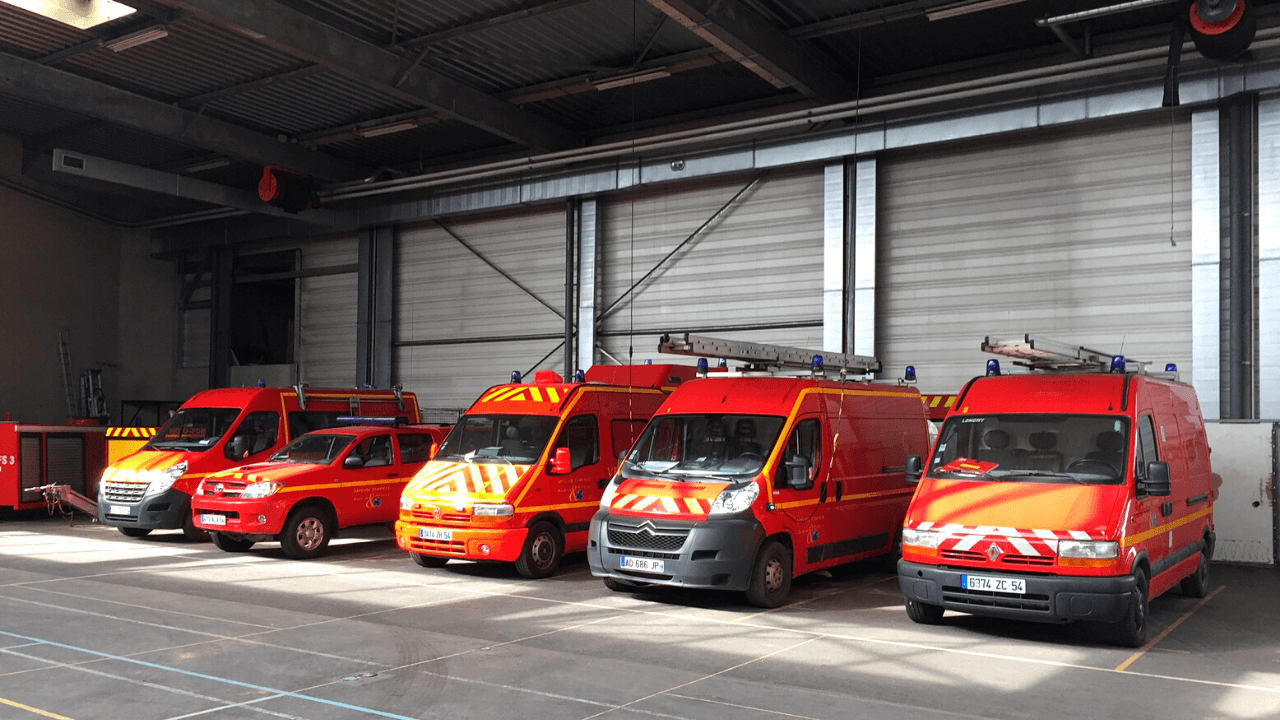 Le VTU or Véhicule Tout Useage (Multi-use vehicle) is a van that carries two or three firefighters to intervene in a variety of situations. These range from aiding occupants trapped in an elevator to placing staging tarps and mats at the scene of a fire. The vehicle may assist in pruning a hazardous tree, removing wasp nests, assisting / capturing animals, or helping clean chemical spills.

The firefighters will bring the tools needed for the job in this particular van, but most carry a hand ladder, various firefighting gear, cleaning materials and protection against hostile insects.

A VTPM or Véhicule de Transport de Personnel et de Matériel serves as a way to bring reinforcements or much needed materials to a scene. It functions similarly to a VTU. You may find it removing a fallen tree from public roads or assisting in flooding or disaster relief efforts. Lastly, a VTPM drives firefighters to meetings, gatherings, or special events.

There’s no way a list like this can be completely comprehensive because there are so many variations and specialized vehicles.

However I hope this overview helps illustrate the most common French firefighting vehicles and the purpose behind them.

And remember: to call the French firefighters, you’ll want to dial 18 or 112 (Read more: Emergency Phone Numbers in France). You’ll find this number plastered on all of the vehicles. 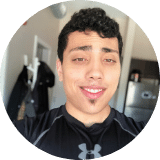 Born in Manhattan, John visits his family in France on a yearly basis. He started studying French in 2004 and holds a university degree in French with a minor in linguistics. Learn more about John →