Quiz: Do You Know France? 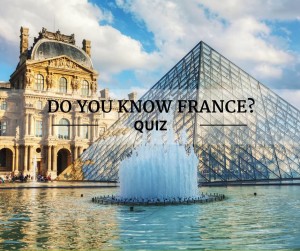 Francophiles are crazy about all things French. To prove if you merit that title, I created a general quiz about France’s history, government, politics, territory and people. You don’t need to speak French to answer any of the questions. Our 20-question quiz will separate the true Francophiles from the phonies. Record your answers and verify how many correct responses you have at the bottom of this page. There’s also a nifty scale to rank yourself. Good luck and NO cheating!

1. Who is the current president of France?
A. John Elkhoury
B. Marine Le Pen
C. Nicolas Sarkozy
D. François Hollande

5. From where did the French Emperor, Napoleon Bonaparte, originate?
A. Corsica
B. Monaco
C. Lyon
D. Waterloo

9. Who is France’s largest export partner?
A. The United Kingdom
B. Germany
C. Japan
D. The United States

15. Which country does not border mainland France?
A. Luxembourg
B. Belgium
C. Austria
D. Italy

16. France has a large car market with several brands. Which brand of cars did not originate from France?
A. Dacia
B. Peugeot
C. Citroën
D. Renault

18. Who is not a French philosopher from the Enlightenment era?
A. Voltaire
B. Molière
C. Montesquieu
D. Jean-Jacques Rousseau

20. Which French singer did not originate from France?
A. Jacques Brel
B. Brigitte Bardot
C. Edith Piaf
D. Renaud

You either possess a wealth of knowledge about France or you cheated on this test. Congratulations, you are crazy about France and merit the title “FrenchCrazy”.

You have an impressive amount of knowledge surrounding French culture, history, and current events. Do you know France? The answer is a resounding “yes”. Keep up the good work!

You’re a traveler, a French teacher, or maybe just a French person who slept during history class. You nailed a good portion of the questions however your performance suffered somewhere along the way. Nonetheless, this is an above average score.

French culture interests you although there are a bit too many gaps in your knowledge to consider yourself a Francophile. Keep studying and like us on Facebook for more tips.

You did poorly and you found this quiz stupid and/or difficult. It’s never too late to improve your understanding by browsing our top articles.