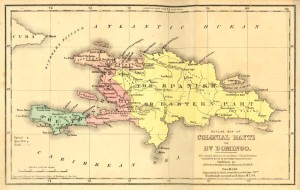 The French colony of Saint-Domingue (Haiti) is an intriguing case in world history. Did you know Haiti is the only sovereign country formed from a slave uprising? It’s also the first black-led republic ever established (1804).  More often than not, students of French have extensive knowledge the French revolution and then are clueless about the Haitian one. To make yourself a more well-rounded individual, keep reading and see if you learn something new today. At the bottom of this article, I present a nice documentary (versions in French or English) on the matter.

The first Europeans to arrive to the island of Hispaniola were the Spaniards. Disease and brutal treatment of the people ravaged the native population. As the Spaniards moved on to bigger and better conquests (Mexico for example) while the French slowly (and illegally) settled onto the island. The western third of the island was later given to France to end hostilities between the two nations via the Treaty of Ryswick (1697). The colony of Saint-Domingue was born.

The small colony became more profitable than the 13 United States combined. The French increased their reliance upon slave labor and devised a network (later known as the Triangle Trade) to move slaves and goods between Europe, Africa, and the Americas. Sugar, which was a commodity for the wealthy, would be cultivated within the colony, exported exclusively to France and then sold to neighboring countries for ten times the profit. By 1789, Saint-Domingue produced 3/4’s of the world’s sugar and was a top producer in coffee. In fact, it was the world’s richest colony and the busiest trade center within the new world, receiving over 1,597 ships.

Unfortunately, an economic powerhouse such as Haiti was designed off of the blood, sweat, and tears of slave labor. Slaves made up 90% of the colony’s population. One in three slaves (mostly from Africa) died within his or her first three years of labor. The people in Haiti needed a hero. 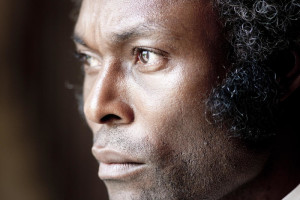 Toussaint Louverture, an ex-slave, led the Haitian revolution. He is sometimes compared to a black George Washington and is even credited as a genius (within the movie below). He organized the insurgents within the mountains and fielded a black army against professional European soldiers. The bloody revolution lasted for over a decade. Plantations and factories burned, and many were killed. All Toussaint wanted was liberty and fraternity to exist in Haiti; he wanted his people to be recognized. He cited the words of La Déclaration des droits de l’homme et du citoyen, which stated that all men were equal (which clearly was not the case in Saint-Domingue). Eventually, the French government abolished slavery across all of its territories. Over a million black slaves became French citizens, but it wasn’t enough.

The news of Toussaint’s army routing the whites did not bode well in both Europe and the United States. In fact, it worried white plantation owners in the Virginia that a slave uprising could occur there.

The existence of a negro people in arms, occupying a country it has soiled by the most criminal acts is a horrible spectacle for all white nations.

– French Minister Charles Talleyrand to James Madison, trying to coax a U.S blockade of the country.

Haiti was so wealthy that the French, Spanish, and even English forces all tried to contest the colony at later dates. Eventually Toussaint creates a constitution and everything seems to be going better, until…

Napoleon Bonaparte took power within France. This worried Toussaint that slavery could become reestablished within Saint-Domingue. To make matters worse, the idea of a black republic was repulsive to the rest of the world. Napoleon’s response was to send an expeditionary force of 28,000 soldiers to regain order within the colony. For 3 more months, Toussaint battled the French. Unfortunately Toussaint was eventually captured and taken to France where he would later die. Meanwhile, the European contingency suffered heavy losses to yellow fever and a defeat from Jean-Jacques Dessalines, which ended the struggle. The French eventually abandoned the island with their remaining 7,000 soldiers.

Victory was achieved at last.

Watch the video in French within this embedded link or via this link. Alternatively, watch the movie in English here. To read more about Haiti’s contemporary history, click here.