Roughly 6 years ago, me and my little brother ventured around Paris. Hungry, we decided to eat at a nice Parisian café next to the Seine River, Le Café du Soleil.

Both of us were French language learners so we decided we wanted to order in French. At the time, my French was not very good. After being seated and receiving the menu, I politely asked for a bottle of Perrier, that is when the French waitress immediately responded in English and proceeded to ask us what we wanted to eat… all in English.

As you could imagine, this was pretty discouraging for me and my brother because we WANTED to speak French! I found someone with a similar event problem:

I went to Paris 2 years ago. When I was there, I was learning the language by talking and listening to the local people. But, while I was trying to speak French with them, they would speak English to me. I am going back this november. What can I do to get them to speak French?

I decided to give a couple tips on how to counteract this barrage of English upon the willing French language learners. These tips are crucial if you are a beginner who wants to practice while in France! 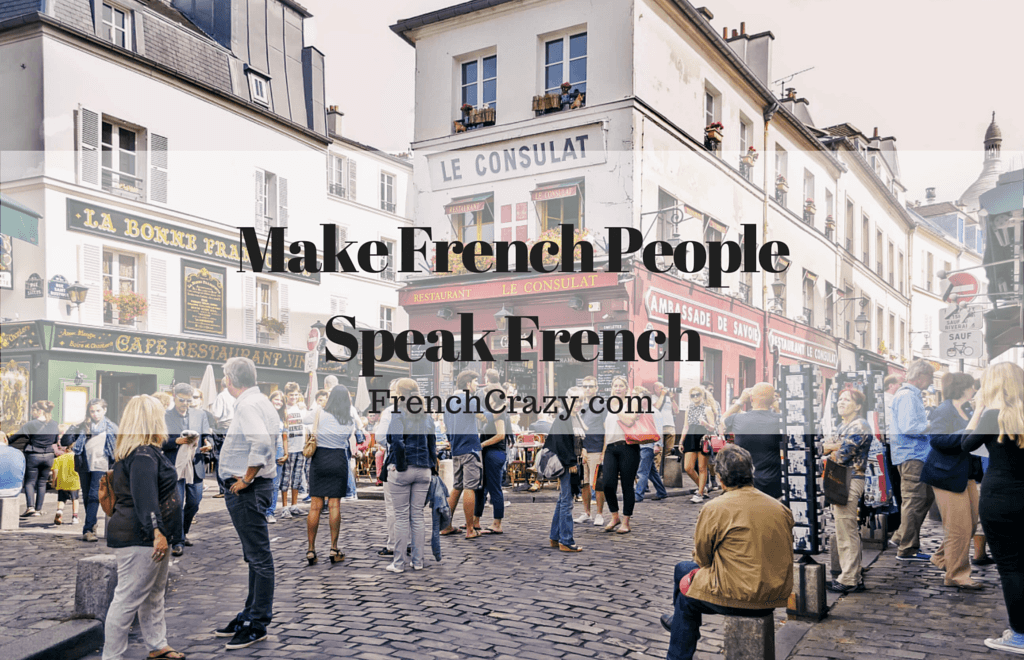 Before going into how to make French people speak French with you, there is something to remember. Some of the later tips may seem aggressive, however they are not. They are assertive, which means you do what you must to get things to go your way. This word is void of “being mean” or bashful.

Surprisingly there is this image that Americans only want people to speak English, and you can change this. Always greet people with a hearty “bonjour!” (or bonsoir) and try your best to interact in French.

Avoid using any English with them or else this may seem like an invitation to continue the conversation in English.

If the interlocutor  continues in English politely ask something along the lines of: “S’il vous plaît je voudrais parler en français“… If they try switching to English, do not acknowledge it and continue with your French. Persistence typically pays off. Asking politely is the best tactic because you can salvage the interaction rather easily.

If the French person is hesitant or is still continuing to speak in English despite asking nicely, try to reason with them. Explain that you REALLY need to practice speaking with others. Explain how you traveled sooooo far to speak with French people and that there aren’t many people to practice with back at home.

Usually a sensible person will understand your endeavor and gladly speak the language with you to help you out.

If their English isn’t too good, act as if you don’t understand what they are saying. Or better yet, speak at an extremely rapid pace.

This may sound mean, however desperate times call for desperate measures.

The person usually will give up and speak French with you after the embarrassment or frustration. Deception also plays a role if you could be perceived as having another ethnic background; use that to your advantage!

My one friend looks Greek so he specifically says he’s Greek when in France to avoid being spoken to in English. It’s hilarious seeing the puzzled look on a French person’s face when their English comment is replied to in (limited) Greek. They then realize that switching to French would be the best communicative solution.

If your French is pretty bad to the point where the conversation is really being hindered, try to compromise. Ask if the other person could speak English but you speak French OR if you can speak English and they speak only in French.

Try keeping it 50 – 50 and have a worthwhile interaction.

If you have really good French then this tactic should be avoided because YOU should be speaking in French then. However, with my French cousins, I usually like to help them out and speak English and they reciprocate and speak French with me.

Sometimes some battles are just best left unsought. Rather than getting into an argument with somebody about which language to speak, the best course of action would be to avoid people who want to speak English with you (against your will) in France. Quite frankly, you should not settle for speaking English in France if you don’t want to. If you think about it, English is a hot commodity in France and English courses cost hundreds to thousands of dollars. Instead of letting people get their free English practice with you, simply leave.

Save yourself the hassle and create a French network of friends and acquaintances who want to speak French with you! This may be hard at first, but it would pay off in the long run.

Conclusion
Tired of French people speaking to you in English? Use these tips to ensure you are speaking French in France. Never settle for less than your expectations, after all, you are the one who traveled and earned the experience!

Any comments can be left below without any subscription required.