I want to share my observations on an interesting second-language learning phenomenon. I coined the term, The Pronunciation Paradox.

What is The Pronunciation Paradox?

Before diving in, here’s a bit of back story. I receive a lot of compliments from French natives about my French. What’s most impressive is that I oftentimes fall into one of three categories:

– “You have a slight accent, do you come from Québec? Algeria? [insert other Francophone region here].”

Despite the compliments (and humble-bragging), I’m not perfect in any sense.

I make many international friends here in France, some coming from Italy, Spain, Mexico, the U.S, the U.K, or Germany. Together we talk to French natives and I’d notice how people marveled at me but ignored complimenting the other French-speaking foreigners with me. My friends aren’t bad in any grammatical sense (syntax, semantics, vocabulary), but they do have noticeable foreign accents.

I brainstormed some ideas with a buddy to explain this. We came up with a possible scenario:

– Person A has great pronunciation but makes grammar mistakes and maybe has a lacking vocabulary.

– Person B has great grammar and expresses him or herself well but sounds horrible when speaking.

Who appears more fluent? Those I asked overwhelmingly say Person A.

Now I don’t have sub-par grammar, but the point still stands. There’s an increased emphasis on pronunciation. 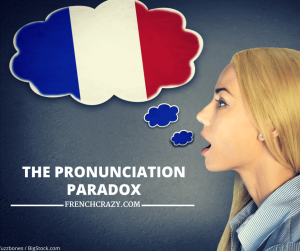 If you’re learning French for a business or academic setting then you should focus on minimizing grammar errors. If you only want to speak French with friends then emphasize your pronunciation. Oftentimes people let the small grammar mistakes slide in an informal setting, but in a professional context these can be detrimental.

The phenomenon is paradoxical because if you want to improve your French or your impression of sounding fluent, you would probably run straight for a grammar book or try to acquire more vocabulary. I believe that there’s a bigger return on investment if you dedicate more time to how you sound when speaking.

People don’t care what you say – as long as you sound good saying it. There is a bigger return on investment if you dedicate more time to how you sound when speaking. – John Elkhoury

Bad pronunciation isn’t the only problem that French learners face. Coupled with a heavy accent comes poor listening-comprehension skills and/or a lack of speaking practice. A wise colleague I work with once said, “Quand on est sourd on est muet.” You can’t expect to pronounce words well without distinguishing sound differences.

Why is this paradox a problem? There exists French fluent individuals who have an atrocious accent. Some examples could be foreign-born French teachers, expatriates living in France, or migrant workers seeking a new home. These people may not habituate or fully internalize some of the pronunciation rules. Does that make them less fluent?

But I do know of instances where language students saw their instructor in a bad light simply because he or she did not have a “native” accent. These students would comment about the instructor behind his or her back. It’s a real issue.

If you need to improve your pronunciation? Here’s my 2,000 word pronunciation guide and here’s an article looking at French phonetics and phonology.

Don’t stress out about this fact though. If your foreign accent doesn’t hold you back and you can be understood then there’s no problem.

The future of The Pronunciation Paradox

My claims currently lack scientific testing from the (psycho)linguistic community. It would be interesting to know to what extent you can modify grammar mastery and pronunciation to achieve an interlocutor where most natives would say, “Ah yes, that lad is fluent!”

There’s also the case of what we’d be modifying. Would researchers tinker with the syntax, semantics, or the lexicon of the “bad-grammar” group? If they choose all three then to what extent will we alter them? Likewise, how would we classify good pronunciation? It varies between foreign languages.

Is this paradox real? If so, what could cause it? I’m hoping that somebody can point me towards more worthwhile (peer-reviewed) sources.

Does The Pronunciation Paradox exist? You tell me your stories.