McDonalds in France: The American Plague

France is McDonald’s 2nd largest market after the United States. Essentially, McDonalds and the Americanization of fast food has hit France hard. 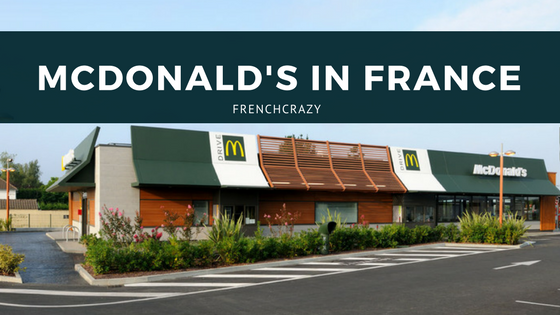 Everything from the customized French look to the “Quality” ingredients. McDo, as it’s often called, launches commercials which boast that their potatoes are chosen from Belgium and France. They offer garden fresh salads and a myriad of delicious wraps (I tried one!). The French “Happy Meal” actually comes in the cool red boxes that us Americans always see, but never get. My little cousin selected the happy meal and it even included a drinkable yogurt! If you go to the official McDonalds France website (and can read French), then you’ll see how McDonalds evolved its restaurants to handle the typical French criticisms of sanitation, quality, or regulations:

“Our ground beef is 100% beef, 52% from French cattle. At all steps of creating the hamburgers, strict hygienic regulations were followed. All of our slaughter houses conform to regulation, a veterinarian also supervises and controls the sanitary state of our chickens.”

I also noticed that McDonalds uses national pride as a selling point, “hmmm all these ingredients are from France, I should buy it to support us!” or, “France makes quality ingredients, so the food must be good!”

The locations I’ve visited all had kiosks where you could order your meal yourself without having to go to the counter. I’m pretty sure they implemented them because you have the ability to select your language, this allows incapable or scared tourists of still getting McDo without the hassle of speaking French!

Of course, I manned up and ordered the old fashioned way, en français. It was extremely funny because the cashier was my neighbor’s daughter, so she actually gave me some extra food. “Great, more calories,” I thought.

The only downfall to French McDonalds was the price. Everything in France seemed more expensive and you’d get less food for the price. My French cousin raved about how Americans were able to fill up their drinks as many times as they wanted, you don’t have the same luxury in France. That’s not even taking into account that the prices were in EUROS, which tend to be valued higher than the dollar. It was a good experience for me, and my cousin’s friends were all very delighted to pay (I forgot my wallet)…

Yet, the whole time I was bothered because the idea of McDonalds fights against the French ideals of small portions, slow eating, and wonderful French cuisine. While France does add it’s own French twist to McDonalds, this Americanization is slowly destroying the French culture that we know and love.

Have you ever tried McDonalds abroad? Do you think fast food in France is impacting more than just the obesity rate? I’d love to hear your comments below (no special subscription required to comment).