Located in the heart of Paris, France, Le Musée du Louvre is one of the world’s most visited museums.

Le Louvre houses up to 35,000 individual masterpieces, from contemporary to prehistory works. But with an impressive 600,000 square feet of exhibition space, making your way and navigating through this beautiful museum can be an overwhelming experience, especially if you don’t know what to look out for.

In this article we touch base on what there to see at Le Louvre, the best time to go, and the best way to avoid the lines. We also have a few helpful survival tips on how to make your trip less stressful and possibly save you money.

In 1190, The Louvre was originally built as a fortress, but was later reconstructed to serve as a royal palace during the 16th century. The monarchy would eventually vacate and move to the famous Château de Versailles.

During the wake of the French Revolution, The Louvre Palace and all of its contents were nationalized, with The Louvre first opening its royal doors as a museum back in 1793. The museum’s art collection has grown ever since due to private donations and art looted by Napoleon’s armies.

Thanks to Napoleon III and President Mitterrand, The Louvre has a modern appearance. President Mitterrand’s Grand Louvre project was responsible for the production and erection of the famous glass pyramid. In 1993, the Richelieu wing was finally added to the Louvre, doubling the amount of exhibition space.

What should I see at Le Louvre?

Knowing what art pieces you would like to see during your visit to The Louvre makes a stress-free trip. You should visit the Louvre’s website or study the map provided on site. Nevertheless, once you are inside in the museum, here are a couple of our suggestions for the top ten must-see pieces during your trip. 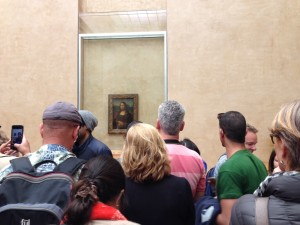 1. The Mona Lisa
Nobody in their right mind would miss catching a glimpse of the famous Mona Lisa during their visit to The Louvre. To see “La Joconde,” head straight for the 13th to 15th century Italian paintings section, situated on the first floor of the museum (Danon wing). There will be a large crowd of individuals pushing their way to the painting. The key is the be patient and gently move in with the crowd. Remain calm, you will get your photo opportunity.

Nearby is my favorite painting done by Eugène Delacroix called “La Liberté guidant le peuple.” It shows Marianne leading the July revolution of 1830, holding the French tricolor flag, and donning her Phrygian cap. Marianne is the national symbol of the French Republic.

3. Nike of Samothrace
Nike of Samothrace also known as the Winged Victory is a piece of art that is nearly 2000 years old. It’s hard to miss. If you’re on your way to the Mona Lisa then you’ll see this piece sitting atop a flight of stairs with crowds of people surrounding it.

4. Venus de Milo
Hidden away is the famous Venus de Milo statue. This particular work was on the original seal of the American Society of Plastic Surgeons, which seems bizarre as she has some missing body parts. She is still worth admiring – it’s what’s on the inside that counts.

6. Dutch Art Collections
Made up of 17th and 19th century Dutch artists, many visitors forget or don’t know about its fine art which means that it’s typically a quiet area. This wing is a great place to rest up and take in all the wondrous pieces without the sounds of enormous bustling crowds.

7. The Raft of Medusa
This piece from 1818 was produced by the French Romantic lithographer and painter, Théodore Géricault. Rather than the traditional yet classic Greek theme which is often associated with the name Medusa, this piece demonstrated the aftermath of the French Vessel Meduse’ shipwreck where 146 passengers struggled to survive on just a raft. Only 15 passengers were rescued, while others were eaten, were killed, died or even committed suicide. The painting highlights the exact moment when the passengers are appearing to be rescued from the savage ocean. The history behind this painting alone is certainly worthy of a visit.

8. Madonna on the Rocks
Madonna on the Rocks was produced by the famous Leonardo da Vinci. Jesus, The Virgin Mary and John the Baptist are all present in the piece. If we take away the religious icons, this incredible painting allows you the opportunity to see da Vinci’s skill and mastery far better than the Mona Lisa.

9. Psyche Revived
Psyche Revived by Cupid’s Kiss is a masterpiece sculpture by Antonio Canova. The classic statue was originally commissioned back in 1787.

10. Akhenaten
Akhenaten, the rebel pharoah’s statue is nearly over 3,300 years old. While you visit this piece, check out the history of Akhenaten. It’s an amazing tale.

Even though these ten pieces are recommended, you should still take some time to wander and explore around the museum yourself. You’ll be surprised what hidden treasures you may encounter.

How can I avoid the lines?

The staff at the lines for the Louvre shared this little tip if you ask politely.

If you want to enter quickly then avoid the main entrance situated under the glass pyramid. Instead, head over to the Porte des Lions entrance which is located on the wing closest to the Seine. There is very rarely a line at this entrance (unless everybody read this guide) and tickets can also be purchased here.

If the Porte des Lions entrance appears busy there is always a second option via the underground Carrousel du Louvre which is easily accessible from Rue de Rivoli.

If using the main entrance (which we recommend again) then at least buy your tickets beforehand. People do not realize that there are two lines. ONE is for those who already have tickets and another for those without. Don’t senselessly wait in the wrong line!

F.Y.I, we stood in the “no ticket” line for half an hour to get in on a non-busy day.

The tickets sold at The Louvre are time stamped for that particular day. If you can, purchase them at the automatic kiosks with your credit card to save a few minutes.

When is the best time to visit The Louvre?

The Louvre museum is open each and every single day day of the week except on Tuesdays. The museum’s hours are from 9 a.m. to 6 p.m., except for the days Wednesday and Friday, when the Louvre remains open until 9:45 p.m. 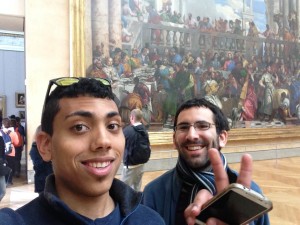 Crowds of people swarm The Louvre during the morning and then the lines trickle away as the day goes on. For this reason, you should wait until the afternoon or evening to visit the museum because it will be void of the large tourist groups and school trips. Consider going Wednesday or Friday evening due to the extended hours. You can spend your entire visit exploring the amazing pieces far more comfortably than those who chose to visit the museum earlier in the day.

In terms of seasons, the best time to visit The Louvre (and Paris in general) is during the early spring months: February, March, & April. This is because many tourists aren’t in France, but rather working towards their summer vacation.

How much should I expect to pay?

The current entrance fee to The Louvre museum is €12 (2015). If you head over to the museum after 6pm during a Wednesday or a Friday, the entrance fee is reduced.

Tickets are FREE for European Union citizens under 26 or students within the EU. You need to have a valid proof of this to enter. My buddy was an American yet managed to get in for free by showing his Visa from Spain which was tucked away in his passport.

During the Bastille Day (occurs on the 14 July) and during the first Sunday of each month the museums entrance fee is free for everyone throughout the day. Nevertheless, expect the museum to be far busier during these times.

1. Even if you’re not into art, the Louvre will take a substantial chunk of your day. Plan to spend a minimum of 3-4 hours total when you factor the lines, crowds, and the amount of walking you’ll do. If you buy more exhibitions or really are an art history fanatic then you could possibly spend a whole day or two.

2. Ask the staff if you’re lost, they are usually posted in every room or hallway. Navigating the museum can be daunting at times, even with a map.

3. Don’t just make a mad dash to the Mona Lisa. It’s famous, but a bit overrated anyways. There are other great pieces to enjoy in the Louvre.

The Louvre museum is a must-see tourist stop in Paris. If you found this guide helpful then feel free to bookmark or share it to help you out the next time you’re in Paris.