Vegetarians and PETA supporters should leave now. I ate a baby calf’s head, and it was delicious. 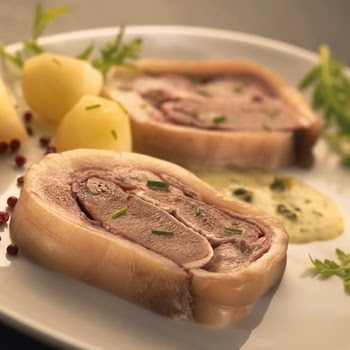 Warm, tender meat surrounded by a gelatinous skin and coated with a flavorful gribiche sauce. Soft to the bite it was easily washed down with a glass of local red wine. Potatoes, carrots and freshly baked baguette slices served as an accompaniment.

This was all created by a wonderful friend from Besançon, France who invited me to his home for the occasion. He’s retired, but he worked as a chef for a living. After spending hours in the kitchen to prepare the feast for fifteen guests the platter of food was finally ready.

My expectations were blown away.

I also had a big helping of calf tongue on my plate, which is the best part. Miam !

But where did this meal come from and why isn’t it as well-known abroad compared to escargot and frog legs?

Numerous origins of this meal exist, yet most are only legends. Numerous associations and clubs each claim a stake towards creating this fabulous dish. Meanwhile the renowned French writer, Gustave Flaubert, traces the origins back to the Brits celebrating the decapitation of King Charles the 1st on January the 30th. After the French revolution and the decapitation of French power, the French lower classes followed suit with this tradition, however they used pig’s head. There is no real point in history when the switch to veal was noted.

The meal lets veal, onions, carrots, and thyme meld for roughly 3 hours in the oven until tender. A complex egg-based sauce then compliments the dish. The gribiche sauce has over 10 ingredients, yet somehow managed to taste like French-onion dip to my unrefined American taste buds. Ladle it over the potatoes and have a blast.

Beware though, la tête de veau is not for everyone. During my dinner I noticed that all the women opted for the fish while all the men had large servings of veal’s head dished out amongst the seven of us. There was even enough for seconds. I think this meal is worth at least a try, although finding it served in normal restaurant may be difficult.

This restaurant in Bourg-en-Bresse was advertising la tête de veau for 16€ per plate. However, you’ll only be served a small portion compared to the family feast.