There are tons of English words used in French.

To the French, knowing English is a way to stay trendy and cool. This is 10 times the case in Paris. English is found in popular culture (movies, TV series, and music) and used in business. Also, with all the new technology and software coming from Anglophone countries, the French language uses more and more English words and Trademarks. 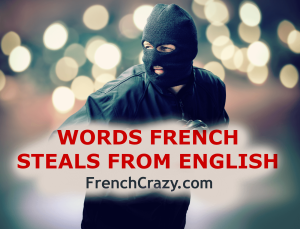 Borrowed words are known as loanwords or in our particular case, Anglicisms. However the English words on this list may be repurposed to different contexts OR pronounced with a heavy French accent, à la française!

So what are some common English loan words that French speakers use? Here at FrenchCrazy I created a huge list. I know I’ll disappoint some Canadians, but this list focuses on the French spoken in France.

Okay / OK / K
There are many speculative etymologies for where the word “okay” originated from, but most agree that the United States created and popularized the word. Okay’s meaning is universal. The French could use the words D’accord or D’acc to signify agreement, but oftentimes prefer “OK”.

Happy Hour
“Happy Hour” (pronounced: ah-pee-owar) can be seen plastered on signs across France. Happy Hour is a magical time of day where drinks are discounted in an effort to drive business. A lot of bars in French cities participate in it.

Un Brainstorming
In France you can faire un brainstorming to come up with more creative ideas. This word is 100% an Anglicism.

Week-end
This Anglicism is omnipresent in France. Despite it being pronounced like ouiquènde we spell it as week-end (the correct spelling is with a hyphen).

Stop / Stopper !
The word stop has origins stemming from Old English and proto-germanic languages. Nonetheless, the French language borrowed the interjection and verb from English. Stop is oftentimes associated with stop signs because that’s what’s written on them. Likewise people may yell “Stop!” to get you to halt although the French do have their own verb, arrêter.

Un Brunch
The word brunch is an Anglicism with the practice made popular in the United States. A brunch is a large breakfast enjoyed around the hours of 10AM and 3PM. Some French people have adopted the custom as well as the word.

Interestingly the origins of brunch has me stumped. Some sources say the idea came from a British writer in 1895, while other sources say it first came from New Orleans, USA.

Un Smoking / Un Sweat / Un String / Un Slip / Un Pull / Un T-shirt
All of these words signify different types of clothing. Un string isn’t a string on an instrument or a thread of yarn but rather a

Un smoking has nothing to do with cigarettes. This loanword is an alternative used to describe fancy suits.

Un job
This word has the same meaning as in English, but is generally used to talk about employment that’s temporary and unimportant. The French word emploi is a bit more standard and formal.

Has Been
I was watching a great French-Belgian-Spanish film, Le Couperet, and heard this expression. A has-been is essentially when someone is washed up and no longer relevent The example from Wordreference:

Un Parking
Un parking is a noun in French to talk about parking lots. The verb to park, however, is denoted by se garer or stationner.

LOL, SWAG, THUG, GANGSTA, ma/ta Life
These words are self-explanatory. They come from popular culture references and music. Voyou could replace “thug” and the abbreviations of MDR or PTDR are substitutes for “lol”.

Une Interview / Interviewer
An interview describes when journalists ask questions to persons of interest. The word entretien is used for job employment.

Un Briefing / Debrief
This word follows the same sense in French as in English. When you need to regroup and plan for an event or situation, you can have a briefing. Following an event you debrief.

ASAP
ASAP (as soon as possible) can be used in writing to represent dès que possible or DQP.

Un Meeting
This French word shares the same meaning as in English.

Replay / en Streaming / en live
If you want to re-watch a TV show that you recorded then we use the words en replay. Streaming is when you watch a film or TV show for free on the internet. En live is a way French reporters or TV shows say they are en direct, or recording at the present moment.

Kidnappeur / Un Kidnapper
When a kid is abducted in France, we usually borrow the English word kidnap and Frenchicize it. The French word enlever could also work.

Marketing
I hear this word on occasion and once I heard it as a verb: “Ils ont marketé leurs produits….”

Un bug / boguer / un patch / hacker
A bug is a glitch in a system or a computer program. French borrowed these words from English despite there now being a few alternatives which nobody uses.

Greetings
Hi, hello, what’s up, see you (CU / CYA), bye, goodbye, and bye bye all could be used and understood when speaking in French. The best way to open or close a conversation, however, would be in French.

I can’t think of many Americans in the States who would greet one another with a hearty “bonjour”.

Un Dress-code
This is an elegant way to tell others what the acceptable dress wear is for the event. I’ve seen this word in brochures as well as posters and signage.

Various foods
Foods which originated from English countries are borrowed in French.

Common trademarks
Trademarks and large corporations retain their names within the French language.

All French people taught to English during their educational career, so I’d venture that the average French person has more exposure English than their American counterparts do with French.

That does it for my list of English words used in French. Are their any words I should add to the list? Lemme know in the comments below :)