Update: As of 2015, U.S. credit card companies are now distributing cards with microchips. Maybe they read this article?

Unfortunately this article is mainly for Americans and other foreigners because our credit cards are still stupid. Yes folks, depending on where you are in France then you cannot rely on your outdated credit card technology.

Navigating the Parisian Metro can be a hassle, especially during the holidays. I found myself as usual in the Rue Diderot entrance (Gare de Lyon) ready to take the RER A to visit my uncle. It was Christmas day in the bustling metro system and the long TGV ride tired me out. Upon walking up to one of the automated ticket vendors it became clear that the group next to me were Americans. The husband tried using his American credit card in the machine and shouted back at his wife with displeasure when he realized the inevitable… his credit card would not work.

I explained to them that the same thing happened to me a while back before having a French bank account. They had no clue what a puce was, so I showed them my French bank card. He would now have to go wait in the 20-minute line for his tickets from a RATP employee unless he had euro coins for the machine. Flustered, he asked me if there were any ATM’s around. Instead, I offered to buy the five metro tickets in exchange for U.S Dollars. The entire family happily wished me a “Merry Christmas” once they realized I saved them an inconvenient wait.

American credit cards lack a little chip or puce in French. This technological difference runs you the risk of a vendor not accepting your swipe-able card because French cards are simply inserted into the device and pulled out once the payment has been made. This may sound like a minor deal at first, however you’ll remember my article when your 120€ dinner goes unpaid for because they don’t have the appropriate machinery.
So remember: When you go to pay for something in France, you risk the vendor not accepting cards which swipe left to right. Also, most establishments have a minimum purchase amount before you can pay with a card (usually à partir de 10–15€). If you do not walk with cash then make sure you ask if they take American cards before eating or filling up that shopping cart. Likewise, stores typically show which credit cards they accept on a little sticker near the entrance or cash register so pay attention.

Make sure you call your credit card company and tell them of your travels around France to avoid those embarrassing denied transactions. For instance, fraud protection deactivated my Visa card and forced me to beg for money in the Paris metro as well as re-reserve another hotel because they canceled my first reservation. Both times I felt helpless as my American card did not function due to suspected criminal activity.

Be wary of international fees (if any) when using your cards abroad. In fact, know whether your card will allow you to withdraw money from an ATM in case of an emergency. I prefer using my debit card for those functions but a credit card would work in a pinch.

Visa & Mastercard are Your Friends

Even if you have a Visa or Mastercard without a puce then most places will still accept your payment. 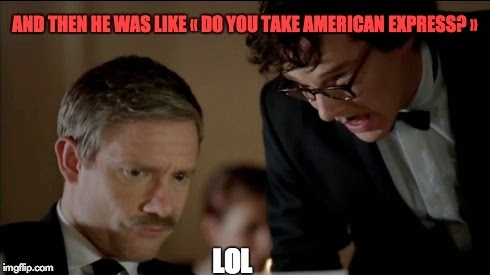 But walking around France with an American Express is like gifting your French friend a bottle of cheap wine and expecting them to be grateful. In short, you may look like a lost clown after asking vendors if they take Amex. They’ll giggle at you for even asking such a ridiculous question. American Express? AMERICAN EXPRESS?

You’ll hastily pull out cash to avoid their mocking and leave the area before the shame consumes you.

(Okay, well enough with the over-dramatization.)

A majority of businesses don’t take the card due to elevated fees forced upon those who accept it. Rather than put up with Amex, savvy Frenchies choose not to take the card. Four out of five restaurants I went into did not accept American Express. Likewise the RATP (Parisian Metro system) also did not allow the card to buy tickets with it at the information kiosks. If you are hell-bent on using your American Express card then keep your eyes open for the logo on signs that show which cards the business accepts. Otherwise, I pray for you.

If you have a credit card with a puce then your life in France becomes a lot easier. That’s how you manage using credit cards in France.