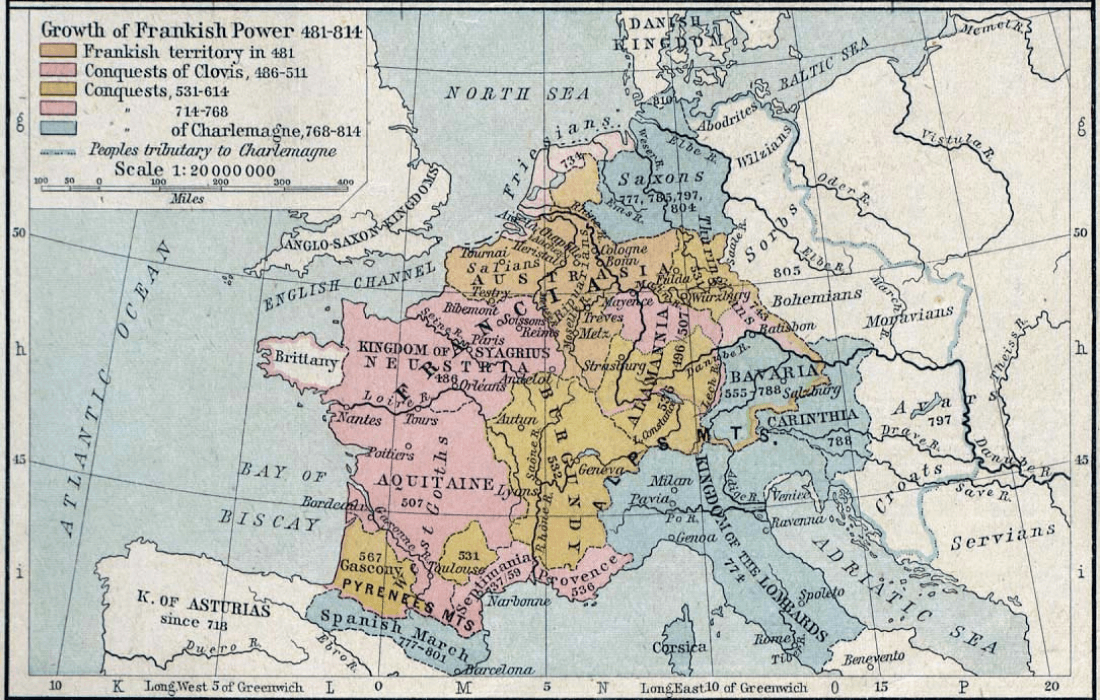 Of all the periods of French history, the two and a half centuries following the collapse of Roman rule in the country and its emergence as part of the Carolingian Empire during the mid-eighth century is perhaps the least well-known. But this was a critical period in France’s history.

It was the point at which “France” transformed from a number of Roman provinces into a medieval kingdom ruled by a Germanic people, the Franks, whose role in the region was so substantial that the modern-day nation of France is named after them.

In this article, we explore the history of the Kingdom of the Franks and the Merovingian Dynasty which ruled it for two and a half centuries.

The region which we know as France today formed part of the Roman Empire from the mid-first century BC down to the fifth century AD and was divided into several provinces such as Gallia Lugdunensis and Gallia Narbonensis.

As elsewhere in Western Europe, the region experienced increasing levels of incursions by Germanic tribes migrating from Central, Eastern and Northern Europe into the Roman Empire from the third century onwards. One of these Germanic tribes known as the Franks had been making attacks over the River Rhine and River Danube into the empire’s borders. Some of them had even found employment as mercenaries within the Roman legions.

In the course of the fifth century as the Western Roman Empire was completely overrun by these tribes, they began taking control over different parts of the empire. The Visigoths eventually conquered most of the Iberian Peninsula and carved out a kingdom there, while the Ostrogoths established a kingdom in Italy following the end of the Western Roman Empire in 476 AD. Several Germanic tribes settled in Roman Gaul, but the greatest of these were the Franks.

By the 470s the Salian Franks had been largely united under a king called Childeric. He was the first of the so-called Merovingian kings. 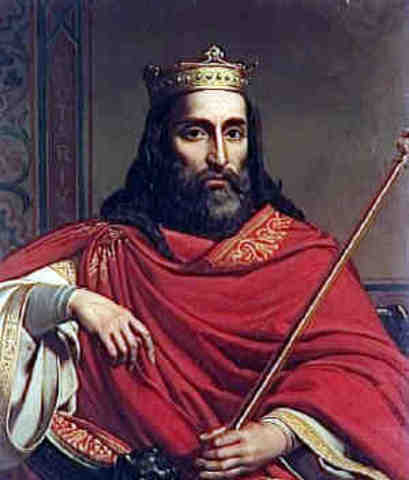 The name of Childeric and his descendant’s dynasty was derived from Merovich, claiming an elaborate origin myth that his mother was seduced by a quinotaur. Quinotaurs were a mythical sea beast that aligned with their Pagan beliefs. Due to this, the Merovingian kings claimed supernatural powers of telepathy, clairvoyance, and the ability to heal the sick. 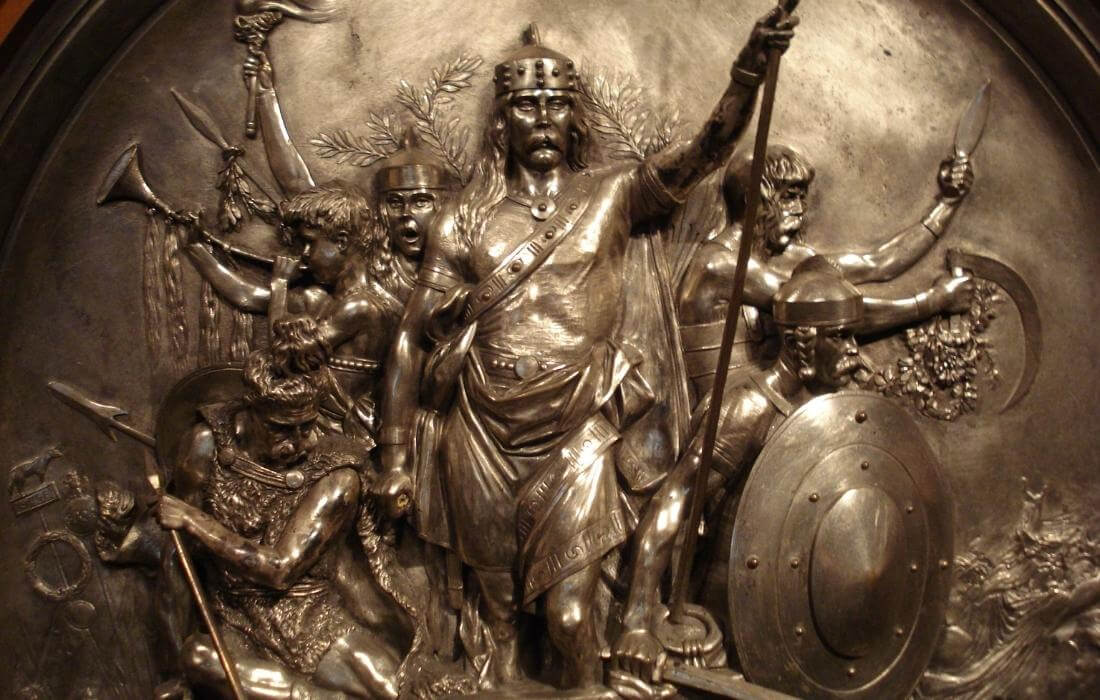 King Childeric carved out a large territory for the Franks in the region which had been Roman Gaul until very recently. He passed away in 481 A.D.

His son Clovis came to power and in 486 defeated Syagrius, a Roman military leader who was trying to carve out his own dominion in the anarchy which followed the collapse of the Western Roman Empire.

Clovis later defeated another rival Germanic tribe, the Alemanni, at the Battle of Tolbiac in 496. This, combined with a defeat of the Visigoths near Poitiers in 507, left Clovis ruling over a kingdom of the Franks which extended across most of modern-day France and into western Germany and parts of Switzerland.

Rule of Clovis I

Clovis I was not just a significant figure for uniting the region under Frankish rule and solidifying the position of the Merovingian dynasty in France. He also began the process of transforming the Kingdom of the Franks into a Christian kingdom and one with a coherent system of government which adopted some of the administrative structures which the Roman Empire bequeathed to medieval Europe. 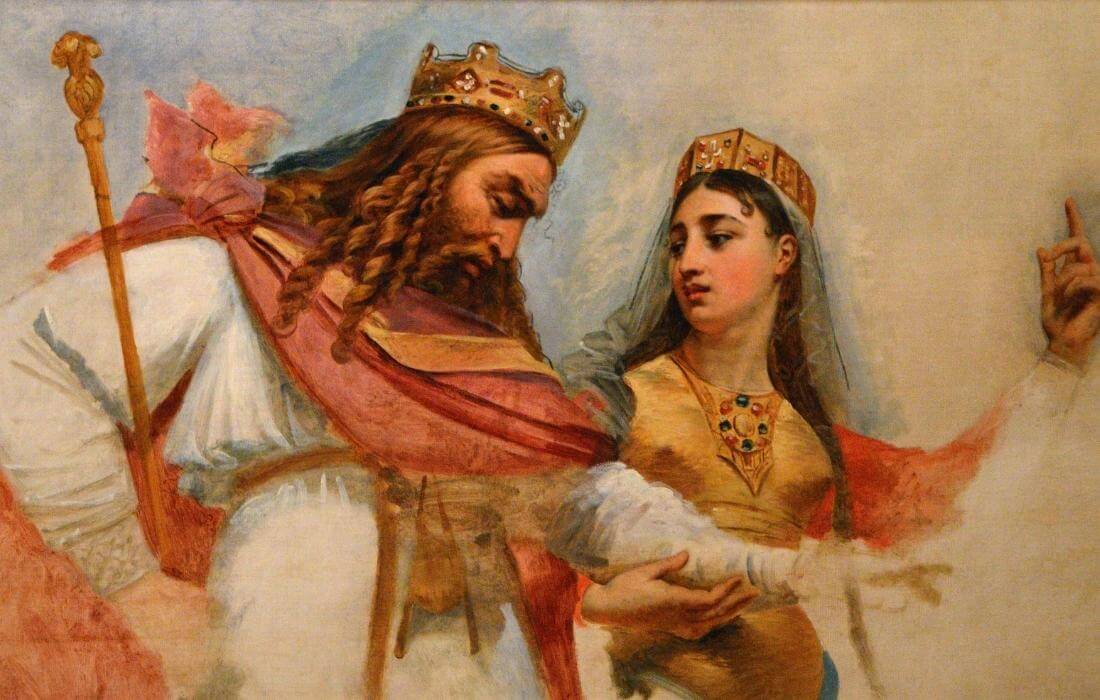 Around the year 500 Clovis converted to Christianity in Reims, France. This is significant as he was one of the first germanic tribes to accept Catholicism and also because he started to dismantle paganism in France.

He also began codifying a new law code known as the Lex Salica, which incorporated elements of Germanic law and Roman civil law in ways which would reflected how most of Europe’s medieval states ruled themselves for centuries to come. The Salian Law had influenced French legal systems ever since.

Finally, he adopted many elements of Roman administration and social hierarchy within the Merovingian kingdom. For instance, his closest followers were often made into magnates called comites after the Roman term for ‘companion’. In time these comites became French “counts.”

Clovis was surely the greatest of the Frankish kings. Unsurprisingly, Merovingian France entered into a period of fluctuating fortunes for decades after his death in 511.

The Franks did not practice primogeniture, whereby the eldest male heir would succeed to the entire dominions of his father or predecessor, but rather the Kingdom of the Franks was divided between his sons and then those sons subsequently divided their lands between their offspring.

As a result, by the late sixth century the Kingdom of the Franks, which had covered most of modern-day France and parts of Germany and Switzerland under Clovis, had been divided up into numerous smaller kingdoms. These were regions such as Burgundy and Aquitania which became firmly associated with geographical regions of France down to the present day.

However, while this weakened the Franks and the Merovingian kings for decades thereafter, eventually the entirety of Clovis’s kingdom was reunited under King Clotaire II in 613.

End of the Merovingian Dynasty

Eventually the Frankish kingdom began to weaken terminally, not owing to any external threat, but a duel for power from within.

During the mid-sixth century an administrative and governmental office developed at the Merovingian court called the Mayor of the Palace. This was essentially a manager of the court and a secretary of sorts who ran the government similar to a modern-day prime minister. Over time the position became more and more powerful, such that by the late seventh century the Mayors of the Palace were seen as being the real power behind the throne in the Kingdom of the Franks.

In the late 680s one of the Mayors, Pippin of Herstal, decided to adopt the title of Duke of the Franks to reflect his authority. Duke comes from the Latin dux for leader, a clear indication of the powers of the Mayors by this time.

When the Arabs attempted to extend their conquests into France forty years later, it was Pippin’s son and successor as Mayor of the Palace, Charles Martel, who led the Frankish resistance to meet them. 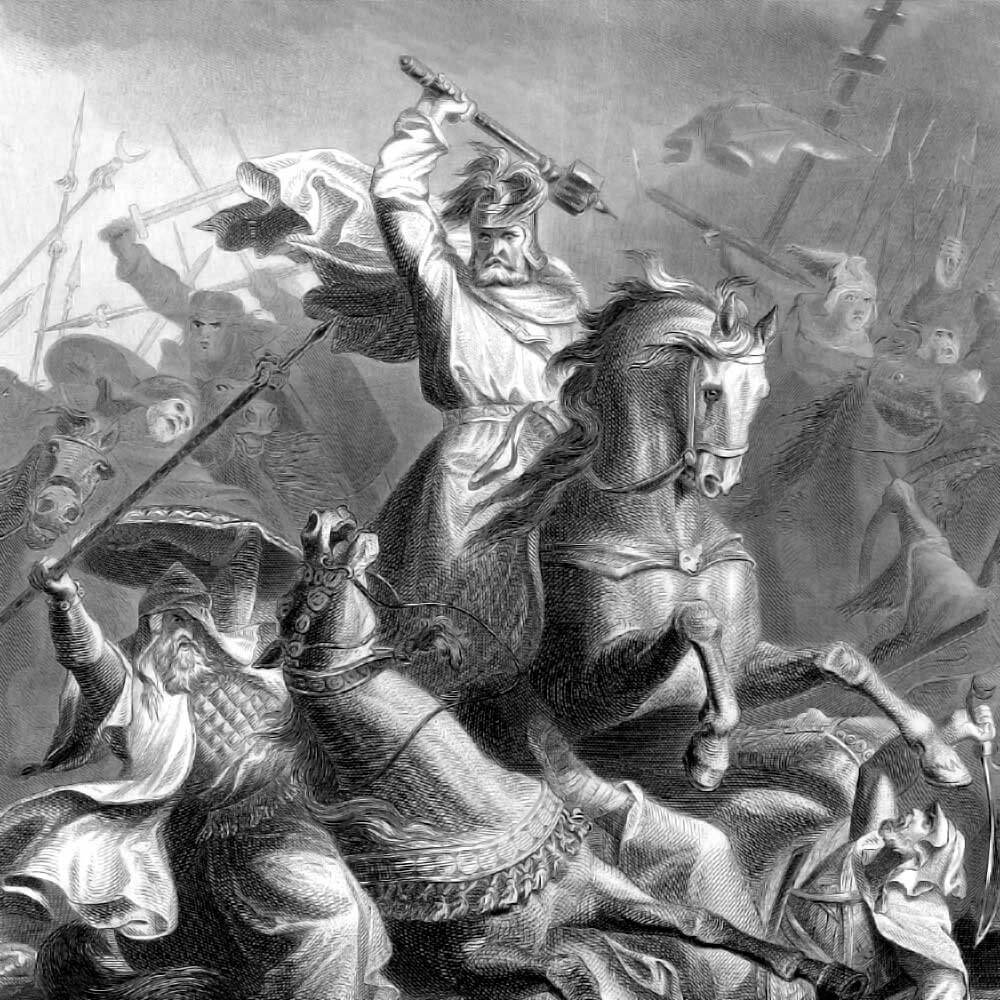 Martel’s forces used surprise, tree cover, and well-trained soldiers to beat back Arab calvary and defeat and them in the Battle of Tours in 732 (see photo above). The reigning Merovingian king at that time, Theuderic IV, is by contrast an obscure figure of whom little is known and who was nothing more than a puppet king.

Martel’s son, Pepin the Short, who had succeeded his father as Mayor of the Palace in 741, decided to crown himself as King of the Franks in 751 following the death of Childeric III. Pepin was simply formalizing the end of the Merovingian dynasty.

With this, the initial Kingdom of the Franks that had succeeded from the Western Roman Empire in France, might be said to have come to an end. It was succeeded by the Carolingian Empire ruled by Charles Martel’s descendants – such as Charlemagne.

I hope this article summarized the History of the Franks succinctly enough. Feel free to check out our French History page for more.

Childeric (437-481 AD) was the son of Merovich and considered king of the Franks and part of the Merovingian Dynasty.

Clovis I (466-511 AD), son of Childeric, was one of the greatest of the French kings. He expanded the territory of the Franks and established new laws used by other medieval states. Clovis also converted to Christianity and

Charles Martel (676-741 AD) was Mayor of the Palace and subsequently Duke & Prince of the Franks. He helped defend France from Arab invaders. His fame and power lead to the downfall of the Merovingian Dynasty.

Pepin the Short (714-768 AD), son of Charles Martel, crowned himself king of Franks in 751. This began a new legacy of French rulers known as the Carolingian Empire.

David earned a PhD in History from the University College Cork in Ireland. He is a French history contributor for FrenchCrazy.