See what I did there? I used the superlative.

“The best” indicates that there’s nothing better than FrenchCrazy in terms of learning French. So how would you say the same thing in French? Did you ever wondering how to say things like the best, the worst, the most interesting, etc…? 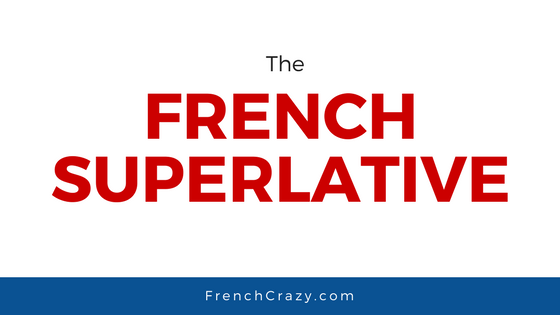 Today we’re going to cover how to effectively use superlatives in French because it’s pretty handy for everyday speech!

After reading this article on the French superlative you should understand:

What is the French Superlative?

In English you could say → Geography is less complicated than Biology.

In French this would be → La géographie est moins compliquée que la biologie.

You notice that we’re comparing one class, Geography to another one. However, we’re not saying that Geography is the least complicated. To say that would mean that we’d have to use the superlative – when your comparison reaches an extreme point and there is nothing past that point.

“Geography is the least complicated class EVER!” → superlative sentence, where Geography is compared to every other class known and we’re establishing that there is nothing that beats it in terms of ease.

So how would you say that in French?

In this case, you must say “est LA moins compliquée” or even “LA plus facile.”

By the way, I’m not trying to insult Geography… I’m simply using it an example.

What are some other instances of the superlative in French?

How do you form the superlative in French?

The big difference between a superlative and a comparative sentence would be using “le/la/les.” These are definitive articles which translated to “the” in English.

1. If the superlative or comparison happens to be an adjective or adverb then you’d construct your sentence as follows:

Elle est douée.
She is gifted (normal sentence without the use of a comparison).

Elle est plus douée que Martha.
She is more gifted than Martha.

Elle est la plus douée
She is the most gifted (AKA nobody is more gifted than her).

2. If the superlative or comparison is a noun, then you’ll craft your sentence this way:

3. If the superlative or comparison is a verb then the construction would be:

Il parle plus.
He speaks more.

Il parle le plus.
He speaks the most.

I hope this series helped you understand how to form the French superlative. If you want to learn French in a more comprehensive manner, you should try this out. Any questions or comments can be made in the section below!