How the Brexit Impacts France

Democracy has spoken. The United Kingdom voted in favor of leaving the European Union. In his speech today, Conservative Prime Minister, David Cameron, will resign within the following months. Despite Cameron being a known Eurosceptic, he spent the first half of 2016 pleading for his fellow countrymen to remain within the EU.

This is the British Exit – the Brexit. A battle between sovereignty & xenophobia on one end versus unity & future cooperation on the other.

So what’s the impact of this all?

Well good news, the world will continue to spin and the sun will rise tomorrow. So I guess things aren’t that bad.

The UK will always be a part of Europe, although they no longer wish to be part of the Union. They will continue to do business with their neighbors and they will continue to be able to travel across Europe. However it would be foolish to assume that nothing will change because world leaders have to go back to the negotiation tables.

It’s weird because I’m an American currently, in France, who is commenting on British politics. But just like how the rest of the world can comment on Donald Trump – I figure that we are all citizens of this world. What happens in other countries reverberate profoundly with us all.

So here’s my viewpoint on the good, the bad, and the uncertainty surrounding the British exit from the European Union and how it will affect France. This article is not the most exhaustive coverage about the Brexit, but it does express a few of my thoughts. Feel free to share your own opinion at the end of the article. 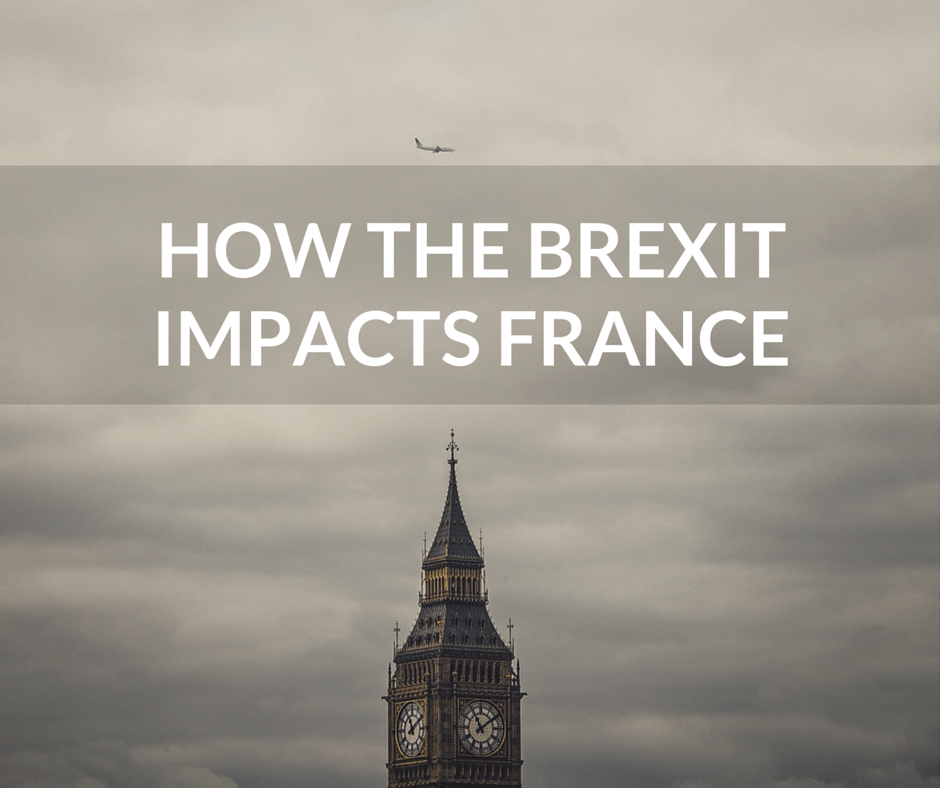 How the Brexit Positively Impacts France

Looking at the Brexit from a French perspective, not all is grim.

Some Frenchies close to me have expressed delight in finally getting rid of the British. Their thought process is that for years Britain never fully committed to the European Union. This wishy-washy attitude, they said, made the Euro weaker in cohesion. The UK’s leaders wanted all the benefits of the EU membership without accepting any of the consequences.

For years the British have discussed leaving the European Union. The UK kept its own monetary currency and constantly fought against EU policies from Brussels. With the British out of the union, France and Germany now have an even stronger role in terms of EU politics. This could be considered good for French leaders and French businesses looking to further their interests across the continent.

Paris is already welcoming British businesses to relocate if they want a global city that has lasting access to the European Union and its free trade. It’s possible that France could reclaim its spot as the 5th most powerful economy, a title it lost to the UK last year. The boost of business could launch Paris to be second in terms of economic power, inferior only to New York City.

Others remain skeptical because France’s legal and tax systems are not considered the most hospitable to businesses. The controversial new labor laws may help change that image and relieve the 10% unemployment rate.

THE STATUS QUO FOR EXPATRIATES

While this isn’t a positive result of the Brexit, at least for the time being the status quo will remain the same. In terms of immigration – not much will change for the 350,000 French expatriates currently living in the United Kingdom. That’s a good start. Although more is to be said on Franco-British immigration in the coming years.

You can read more about the possible repercussions for UK expatriates due to the Brexit.

How the Brexit Negatively Impacts France

First and foremost, the Brexit has economic implications for both the UK and the EU. After the USA, Germany and France are two of Britain’s chief trading partners.

“More than 50% of UK exports go to the EU. The fall in trade will hit exports and the dynamism of the economy.”

Short-term decreases in the global financial markets were expected with a British departure. What we don’t know for sure is how much the UK and the EU will be impacted as well as how much power the Sterling will lose.

In terms of security for the European Union – the UK and France were two of the strongest military mights. While NATO and EU security are intertwined, I’m sure Vladimir Putin is smiling somewhere as he carves out more plans to undermine Western security interests.

I think the worst part of the Brexit is that is has inspired the far-right nationalists in France, like the Front National, to call for its own referendum to leave the Euro Zone.

These comments from today’s New York Time’s article help explain my sentiments better than I can:

The rise of Trump and the Brexit are stark warnings that the Western World is slipping back into feelings of false patriotism and fervent nationalism, and all of this is fueled by prejudice and fear.”

“Nationalism fueled by the fear and hatred of others is not what defines a great nation. This is why, in my opinion, the “leave” vote is such a disappointment. It’s no different than building the farcical wall between the USA and Mexico that most in Britain decried as ignorant bigotry.

God save the Queen, but she’s got a fortune, it’s the average citizens of the UK and the EU who’ll bear the brunt of the bigoted Brexit.”

“It is everybody’s failure; from Cameron to ideological economists. This is the result of massive illusion: a country, if it is big and strong, can stand alone. England never stood alone; the once Great Britain was made possible by colonization of many small countries. In other words, many English people forgot their history. Mr. Cameron should never had this referendum.

The problem with the Brexit is that the major rallying cry behind the “leave” camp deals with immigration. It’s always been a touchy subject.

Personally I think the “leave” camp reacted to fear and xenophobia. It’s not the first time this has happened and it certainly won’t be the last. Immigrants are an easy scapegoat for those who haven’t found much success in the UK’s economy.

Will immigration in the UK will change substantially now? I personally doubt it. There will always be a demand for the United Kingdom, just as their is a demand for people to come to the United States.

The funniest thing is that when asked about immigration – people think about the recent influx of muslims in Europe or other dark-skinned people from foreign lands.

Most of the UK’s immigrants come from countries in the European Union. Immigrants look for work or study abroad opportunities in the UK and a way to better the lives of themselves and their families. The portrayed idea is that immigrants/refugees are criminals, rapists, and a burden on the economy. These arguments, albeit simplified for the purpose of this article, cannot be further from the truth.

Nonetheless, the same thought-process resounds in rural parts of France. Immigrants are a burden, as some French people think. When you consider that the current president isn’t very popular – it’s possible that the far right can work its magic during the French presidential elections in 2017.

Once again it all comes down to a matter of identity, fear, and prejudice. I could spend days debating people about these subjects, but we’ll leave it at that.

Keep Calm and Carry On

ONLY TIME WILL TELL how the Brexit shapes our future. I might look back this article 2-3 years from now and find myself being dramatic. Or, I might nod my head as event after event occurs as predicted.

Will Scotland push for independence considering that they were heavily in favor for remaining in the EU? Will the UK lose economic and political power? Will London remain as the 2nd largest economic hub for commerce or will another European city dethrone it?

There’s a lot to wonder about in the coming days, months, and years.

I do not expect everyone to agree with my assessment on how the Brexit impacts France. So tell me in the comment section below – what are your thoughts on the Brexit?