Slang with a Twang

Let me preface my story by saying that I spent 30 years living in Texas, so imagine my French spoken with a drawl and a twang. I first heard the beauty of the French language in Miss Priddy’s freshman high school class. During my community collage days, my French professor suggested a total immersion program in Jonquiere, Quebec. Within three days, I was dreaming in French — with a Quebecois accent, bien sûr!

Despite such handicaps, I have found most everyone in my travels very patient and appreciative of my efforts to speak their beautiful language.

Except … there was the one time I stopped at a convenience store on the side of the road en route to Amboise.

It wasn’t a stormy night, but it was dark and raining. My three daughters and I were packed like sardines in one of those typical itty-bitty metal contraptions on wheels. We had left Mont St Michel that morning and I knew I was pushing it to get to our reservation in Amboise, but we were so close.

I didn’t want to drive after dark because I don’t have the best of night vision. Sure enough, at one point, I almost missed the curve in the road and would have ran up onto the road median if my middle step-daughter hadn’t miraculously grabbed the wheel in time.

So, between the poor night vision, being rattled by the almost-accident and the rain, I was a wee bit stressed out. I wanted to make sure I was on the right road, so I pulled into the convenience store to ask for directions.

A young woman stood behind the counter. In my best French, I explained I was going to Amboise and needed to verify my directions.

The girl burst out laughing!

Someone else out of my range of vision was sitting behind the counter and the girl looked in that direction, continuing to unabashedly laugh.
I hadn’t a clue as to what I had said that was so funny. In fact, it wasn’t until several years later that I solved the mystery.

I had mispronounced Amboise (Am Bwaz), sounding the “e” at the end as a long “a.”

I was saying “Am bwa zay,” which the girl was hearing as “aime baiser.” Technically, that’s French for “like to kiss.”

But in modern day slang, it’s the equivalent of the American “F” word.

Despite that faux pas, I continue to return to France. Since 1993, I’ve made seven trips. My most recent visit was April 2013. I got to observe flamingos at a wildlife preserve south of Arles, walk the medieval wall around Aigues-Mortes, shop at the Avignon farmer’s market and drive a stick-shift Volvo around the Luberon hill country. Then, I spent 10 days in Paris.

I still can’t conjugate most verbs and I’m far from fluent. But I made my way to my favorite flea market at Port de Vanves, where I bought more postcards, and I found the best brownies in the world at a bakery near the Arc de Triumphe.

Is it any wonder one of my favorite French phrases is “Allons-y”? 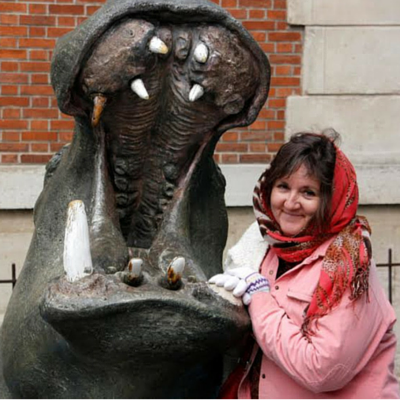