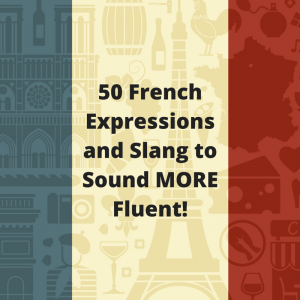 These useful French expressions, words and slang are probably skipped in French class. We compiled a SECOND list of colloquial words you’ll hear in France. You can sprinkle them into your conversations to sound more fluent or smile to yourself when you hear your French friends use these words.

I gathered these words during my time interacting with French natives. Some piqued my interest while others I knew would be helpful to French learners.

Here’s the first list of 25 words if you missed it.

Ça me Soule
If you’re the type of person who’s running late to work and you can’t find parking, this is the perfect expression for you to yell.

It means something is getting on your nerves or that you’re fed up.

Laisse Tomber
A French speaker spends a few minutes telling you something, but you still have that confused look on your face? They may get frustrated and utter:

It means, forget it, forget about it, or fugetaboutit when you’re from NYC.

This French expression is useful when you don’t feel like explaining something again or you want to quickly change the discussion.

Une Clope
It’s 3AM and you’re at an awesome bar or club. Out of the blue, an attractive Frenchie approaches you – maybe the one you were eying down all night. Your heart skips a beat. He or she smiles and asks:

Choper
Choper is a nifty slang verb used to mean to pick up or pull something. I often see it used in the familiar context of picking up a guy or a girl after a night out.

Attaquer
Pacifists beware. It’s hard to say “I’m going to attack this salad” in English without sounding like a weirdo. In France, that statement is perfectly fine. In fact, you can attack a myriad of things in French without being sentenced for assault! So while the verb attaquer isn’t necessarily slang, the alternative meaning is that you’re about to start doing an activity.

When you think about it, we use a similar construction in English. You can say you’re going to go “tackle” some work – figuratively of course.

Vite Fait
I hear this all the time in France. When you do something “vite fait” it means to do it quickly or without hesitation.

Cul Sec !
This word literally translates to “dry ass” in French, but hidden behind the seemly vulgar meaning is sheer encouragement. When you fill your buddy’s shot glass full of Jack, look him straight in the eyes, clink your glasses and then down your liquor in one fell swoop – that, my friends, is a cul sec. As Lil Jon and LMFAO would say, more obnoxiously, “SHOTS SHOTS SHOTS SHOTS SHOTS SHOTS.”

I may have had a few of those while writing this article, so if you see any typos, you now know why.

Impeccable
This is slang 101 in French. Impeccable is how the younger crowd says “perfect.” If your order comes out to 12,56€ and you pay it to the cent, the cashier may likely say this. Likewise you can use this phrase to confirm that 22h00 is fine. It’s a one and done type of deal. Impeccable.

For all those with bad pronunciation, this French word sounds like, um-peck-ab. You should not pronounce the “le” at the end. You could also shorten the word and simply say “impec”.

C’est Chelou (louche)
Chelou is the verlan form of louche, which means strange or weird. It could be used to describe dodgy or shifty characters.

Aïe !
Stub your toe? Bump your elbow into something? Fall down the stairs? Take a bullet to the chest? While your native English-speaking instinct would be to cry out “OWWW!!!” keep in mind you’ve just given yourself away. In France, we yell “aïe!” when in pain. We pronounce this word like the letter “I”.

Un flingue
Oftentimes heard in action movies, un flingue is another way of saying “a gun”. You probably won’t have to use this word, but it helps to know if someone yells “GET DOWN HE’S GOT A GUN!”

Look at that, we save lives here at FrenchCrazy.

Un Truc de Ouf
Ouf is not a real word but rather the inversion of the letters “fou” which means “crazy”. This expression can be pronounced either as: trook dewf /OR/ trook duh ewf.

Les Flic / Les Poulets
With all the recent anti-cop sentiments in the U.S.A, here’s a word that might be useful to my American brethren. Les flics is essentially the word “cop” in French. Don’t worry though, the cops are decent here in France.

Remember verlan? When you inverse the sounds in the word flic, we get “keuf”. This French word also means cop. Mind blown, I know.

Poulet is more pejorative. It’s almost like using the word “pig” in English, so be careful about using this to an police officer’s face.

Piger
Piger is a French verb used as a slang substitute for the verb comprendre (to understand).

Ça craint !
When you want to say that something sucks, you use ça craint! A decent alternative to the overused adjective, nul.

Arriver
When someones says « non, mais j’arrive pas » it means that they’re unable to do something. You try and try again but still can’t manage the task.

This is the term you scream to your friend when you try to back into that parking space for the 3rd time. This is also what I hear when I tutor French kids and they can’t pronounce a pesky English word.

Arriver is also the verb you use to say “I’m coming!” when moving from point A to point B. You don’t say “je viens” but rather j’arrive.

Dalle / J’ai la dalle
Dalle (pronounced d-ahl) is an alternative way to say “nothing” in French. When two French cops are frustrated that the suspect has a solid alibi, you may hear them say:

We have nothing on him. This is a similar expression to “On n’a rien sur lui.” Thanks to the many readers who noticed I forgot the “QUE” above!

One cool thing to do with dalle is to combine this French expression and say:

That means you’re hungry. It’s an equivalent to the elementary French expression « j’ai faim » and you’ll hear it sometimes.

File !
When you want somebody out of your office without wasting energy using multiple words then file (pronounced: feee-l) is what you need. It loosely translates to “get out” and is a less bashful alternative to va t’en.

Carrément
Carrément is used to say “right” or “dead on”. It’s kind of like tout à fait, franchment, or complètement.

Pinard / Picquette
These French words are used to describe low quality wines. A user on Reddit also mentioned that “vinasse” can be used as a synonym here too.

A VOX video, however, shows that price heavily influences our perception of wine.

Want to learn more types of French slang? Check out this post on French Slang (Verlan) as well as this one on French Texting Slang/Abbreviations.

There you have it, 50 total French expressions and slang words you don’t (typically) learn in French class.